The East London Mosque/London Muslim Centre addresses concerns about jihadist and hate preaching at their institution by means of two devices.

First, they issue misleading “clarifications” and promise to address extremism in the future. Second, the worst speakers are packed off to an associated local venue: usually The Water Lily for a few months. When the dust has settled, all promises to deal with the promotion of bigotry are forgotten, and the hate preachers are invited right back.

The spotlight has been off the East London Mosque for some time. Therefore, they’re in high dudgeon again, as we’ve noted in previous posts.

Later this month, the ELM/LMC will host a meeting of the Salafi-jihadi support group, CagePrisoners. CagePrisoners was an outspoken supporters of the Al Qaeda preacher, Anwar Al Awlaki, and campaigns exclusively for those arrested and convicted in relation to terrorist offences. It is run by Moazzam Begg, a man who was arrested following a stint in Afghanistan, where he had been helping an Al Qaeda activist, Abu Rideh build schools for the children of Al Qaeda fighters. Its Executive Director, Asim Qureshi, was filmed on a Hizb ut Tahrir demonstration, exhorting British Muslims to support “jihad” against British troops. It campaigns not for Muslims who have been arrested for ordinary crimes, but exclusively for those who have been arrested and convicted in relation to serious terrorist offences. 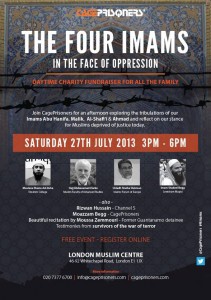 Appearing at this event is Shakeel Begg. Shakeel Begg  works with the Muslim Prisoner Support Group, a charity which has had two terrorists as trustees. Begg is also involved in the infamous “Belmarsh Iftar”. In this clip, he calls the prison’s terrorist inmates “brothers” and rails against their “oppressors”. Not because they’ve been unjustly accused of terrorism, but because he’s proud of their actions. Here he is at the annual dinner of Hhugs, another terrorist support group, where he hails jihad as “the greatest of deeds”:

According to a report in The Times, he encourages students to participate in terrorist attacks on Israel:

Shakeel Begg, another radical cleric, recently urged students at Kingston University, southwest London, to wage jihad in Palestine. In a tape-recorded speech obtained by The Sunday Times, Begg, who is a Muslim chaplain at Goldsmiths College, part of London University, said: “You want to make jihad? Very good… Take some money and go to Palestine and fight, fight the terrorists, fight the Zionists.

He tells Muslims to see the police as the devil, at war with Islam. Even giving a speech to police officers is a betrayal of Allah.