This is a cross-post by Homo Economicus 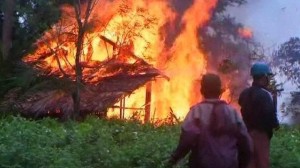 I am still waiting for the foreign office to reply to my letter regarding the case of the Bangladesh bloggers. One hopes that they have been urging freedom of religion, expression and speech.

With Burma there are fears that it may turn into another Rwanda:

As with Rwanda, where the international community was slow to wake up to the genocide, Avaaz says that since the elections replaced the junta with a military-backed civilian government, Western nations such as the UK and France are doing little to stop the deteriorating situation facing the Rohingya.

Ahamed Jarmal, general secretary of the Burmese Rohingya Organisation UK, said: “We are being hacked to death, burned in our houses and driven from our homes. The only way to stop genocide is to prevent it from happening. Before commercial contracts are signed, Cameron must demand that the generals will not wipe the Rohingya off the map of Burma.” [The Independent]

A reminder that Burma’s response to what is going on is to ban Time magazine when it covered the story. The President’s office released this statement:

“The cover story of the magazine, depicting a few individuals who are acting contrary to most of Myanmar, is creating misconceptions about Buddhism, a religion practiced by the majority of Myanmar’s population.” [Source]

More on the actual violence in Burma, and court judgments can be read at “The Guardian” here

So quickly I tweeted back the foreign secretary this morning when he tweeted on Burma’s President Thein Sein visiting:

A few seconds later he tweeted a response:

Hopefully we will not be blind to events on the ground in Burma, paying lip service to human rights while with our hands signing trade deals.