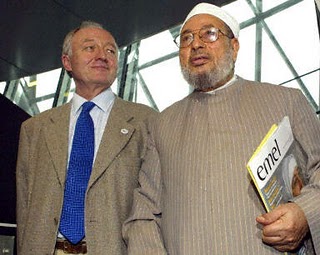 It appears Livingstone favourite and Muslim Brotherhood spiritual leader Sheik Qaradawi has been expelled from Qatar, along with the rest of the Muslim Brotherhood (their offices have been closed) and the leader of Hamas, Khaled Meshaal.

The Muslim Brotherhood is on the slide.

Qaradawi’s statement last month calling for the extermination of Shiites in Syria can’t have helped his case (not the sort of language Qatar needs at the moment), and the new leader of Qatar, Sheikh Tamim bin Hamad al-Thani, appears to have confounded the view that he was more supportive of the Muslim Brotherhood than his father. The shift in Egypt is already having an effect elsewhere. Good.

Update from Gene: DaveM raises serious doubts about this report, and notes that Qaradawi has denied it.