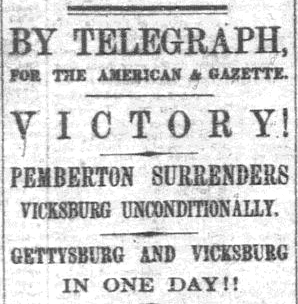 Almost as important in American history as the events of July 4, 1776, are the events on the same date in 1863.

On this date, the funeral dirge of the Confederacy was sounded with its defeat at Vicksburg and Gettysburg. Contrary to the Lost Cause and neo-Confederate revisionists, the South did not fight for “states’ rights,” they fought because of their fetish for human bondage. The Declarations of Causes of Secession by four southern states fail to mention states’ rights at all. And let’s not forget the infamous words of Alexander Stephens, vice president of the Confederacy:

“Our new Government is founded upon exactly the opposite ideas (of the USA); its foundations are laid, its cornerstone rests, upon the great truth that the negro is not equal to the white man; that slavery, subordination to the superior race, is his natural and normal condition.”

July 4, 1863, was a wonderful day in the history of the United States.