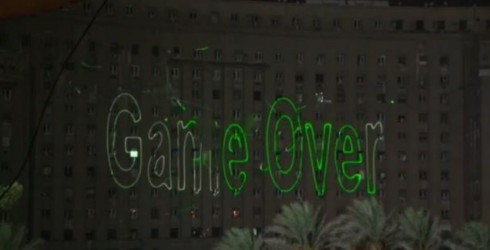 Egypt’s army commander and Islamist President Mohamed Mursi each pledged to die for his cause as a deadline loomed on Wednesday that will trigger a military takeover backed by protesters.

Military chiefs, vowing to restore order in a country racked by demonstrations over Mursi’s Islamist policies, issued a call to battle in a statement headlined “The Final Hours”. They said they were willing to shed blood against “terrorists and fools” after Mursi refused to give up his elected office.

Less than three hours before an ultimatum was due to expire for Mursi to agree to share power or make way for an army-imposed solution, the president’s spokesman said it was better that he die in defense of democracy than be blamed by history.

Jeffrey Goldberg offers a stinging critique of the Obama administration’s overly-indulgent approach to Morsi’s government, and how this has turned Egypt’s anti-Islamists against the US president.

Gen. Abdel-Fatah El-Sisi said the military was fulfilling its “historic responsibility” to protect the country by ousting Mohamed Morsy, the Western-educated Islamist leader elected a year ago. Morsy “did not achieve the goals of the people” and failed to meet demands to share power with opponents who thronged the streets of Cairo and Tahrir Square, El-Sisi said.

Those crowds erupted as the announcement was made on Egyptian television shortly after 9 p.m. (3 p.m. ET). Ahead of the statement, troops moved into key positions around the capital, closing off a bridge over the Nile River and surrounding a demonstration by Morsy’s supporters in a Cairo suburb.

Let’s hope for a minimum of violent reaction from the Muslim Brotherhood, and new elections reasonably soon.

Further update: I find myself genuinely conflicted about these events. As much as I detest Morsi, the Muslim Brotherhood and everything they stand for, they were democratically elected. While I would rejoice over their defeat in a future election, I can’t celebrate their ousting by a military coup.

What prevents further coups, and why will they be any less legitimate than this one?

The number of people filling the streets of Egyptian cities is astounding. Will similarly large crowds legitimize overturning future election results? How many protesters, exactly, will it take? What if those demonstrating are Islamists? Or is the army’s support necessary? Why bother with elections at all if power is settled on the streets? This coup sets a dangerous precedent.

Last night I tweeted a message to Egyptians: “Sometimes democracy means living with your mistakes until the next scheduled election.” I took it down ten minutes later because I couldn’t stomach lecturing Egyptians, many of whom have suffered far more for democracy than me, about what democracy is about.

But the message was true. Morsi should go. Those who want to replace him need to get themselves elected — not installed in the presidential palace at gunpoint.