This is a cross-post by homo economicus

If I had a pound for every time someone mentioned not to mix up the words secularist and atheist, I would have more than financed my planned trip to the World Humanist Conference in Oxford next year. Thatdifference, secularist/atheist, can be read in my essay here.

Secularisation (Secularization in US) 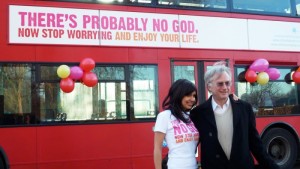 The secularisation thesis held in the 18th and 19th century that religion would drift away as enlightenment values banished the old superstitious order. What was more, there would almost inevitably be no going back to religion, as thought, literacy, education and scientific progress gave birth to modernity and encouraged rationality.

Karen Armstrong and Alister McGrath seize on the fact that religion is still very much with us in the 21st Century. The atheist is a contrarian compared to the rest of the world; the non-religious make up around 15% of the world population.

It is important to note this is secularization – the idea that daily life, institutions and thought move away from religious thinking, ritual and behaviours. Sociologists debate how society has or has not been secularised. These include models like seeing religions in a pluralistic market place where consumers choose, using cost benefit analysis, as well as social networks and social transitions in ideas and behaviours. 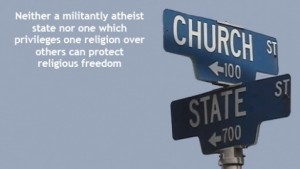 Secularism by contrast is a political and moral theory that the state should be neutral in regards to religious claims, that it will not force beliefs on citizens using penalties or inducements, and that when it comes to a citizen’s contact with state institutions (courts, parliament, welfare office etc) their religious belief shall neither privilege them nor disadvantage them. For more please read my essay Religious Freedom is for Everyone.

So when a non-religious person criticises Channel 4 broadcasting the call to prayer for Muslims during Ramadan, or think Radio 4 should not have “Thought for the day” which excludes non-religious humanists and atheists, you are advocating for secularization.

When we challenge unelected Church of England bishops in the House of Lords, we are by contrast advocating secularism. It is not that we think religious believers should not be in the Upper Chamber of Parliament. Rather it is a privileging of religion having bishops appointed by right of establishment.

It is crucial to make the distinction. The secular outlook matters because it is a political theory designed to ensure that human rights, religious freedoms, free speech and free expression are protected by the state. A citizen cannot lay claim that by religious belief they may impose their belief on another.

In a world of religious violence, global Islamist terrorism, death penalties for blasphemy and apostasy, and religious people and athesits having religion imposed on them by state sanction, secularism is the political theory to uphold, embrace and cherish.

The secular state is the only one that looks to avoid imposing secularisation or religion on its citizens, by maintaining a neutral stance in matters of religion. As such, religious believers and atheists can be secularists.

Criticism of the secularisation thesis has no bearing on supporting secularism as a political principle to maintain human rights. So bear in mind the distinction because it matters for this final point.

Secularism is not anti-religion. Secularisation can be.

The sign post picture comes from an article today in the Muslim Times called “Secularism Debate” focusing on Pakistan, and how secularism is misunderstood as anti-religion there. Worth reading.