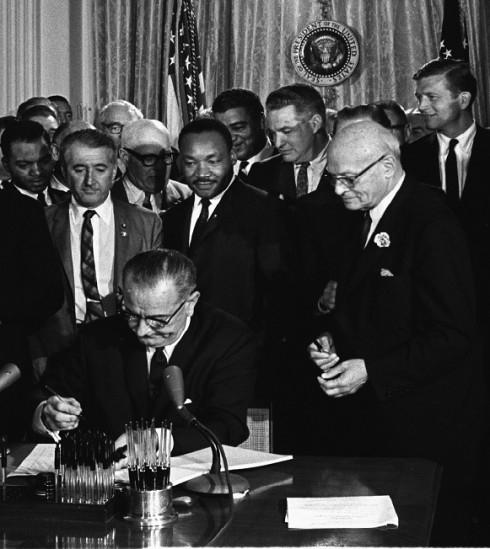 Growing up in the Maryland suburbs of Washington, DC, I’m old enough to have picketed with my mother and others outside a nearby whites-only amusement park. The law put an end to that sort of segregation of public accommodations.

Johnson was a deeply flawed human being (as anyone who has read some or all of Robert Caro’s magnificent multi-volume biography will know), but on civil rights he understood both the moral imperative of federal action and the devastating impact it would have on the Democratic party in the southern US.

And while Republicans in Congress largely supported the 1964 law, and GOP leaders are now trying to recast themselves as the great historical champions of civil rights, it’s important to recall some of the prominent Republicans who at the time opposed it: 1964 presidential candidate Barry Goldwater, future president George H.W. Bush and future president Ronald Reagan (who thought it was unconstitutional).

Strangely enough, the following year Reagan said: “I favor the Civil Rights Act of 1964 and it must be enforced at the point of a bayonet, if necessary.”

And the year after that he said: “I would have voted against the Civil Rights Act of 1964.”

Anyway I can’t think of a better way to mark the anniversary than by listening to the song recorded by the great Sam Cooke a year before: