Tonight, why not go along to the East London Mosque/London Muslim Centre to participate in the “No Place For Hate” rally? 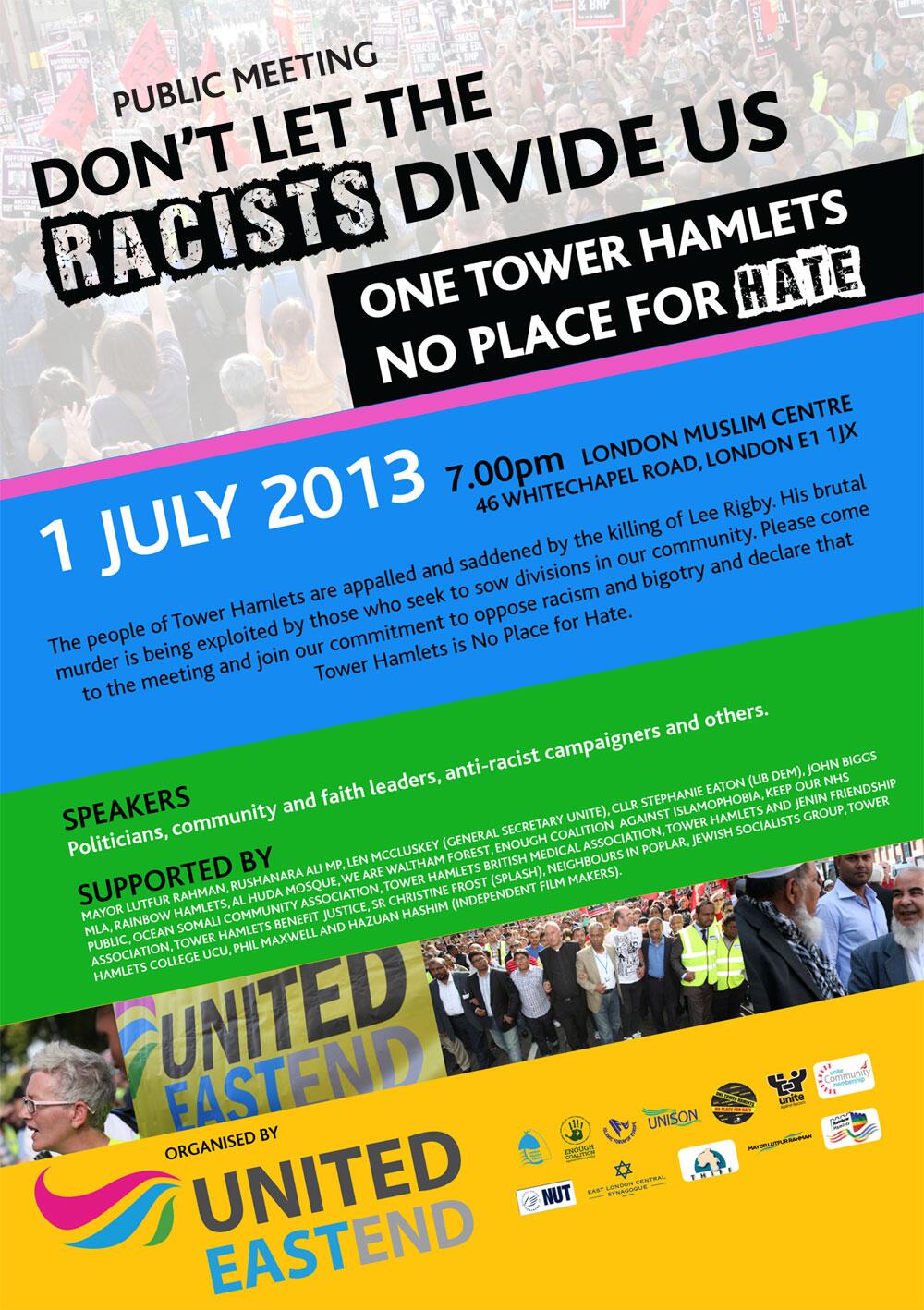 The event is backed by Labour MP Rushanara Ali, Unison, the extremist-backed mayor Lutfur Rahman, and the Islamic Forum Europe: a group which is aligned with the South Asian Islamist party, Jamaat-e-Islami, and which was founded by men who are wanted for the most horrific war crimes perpetrated against Bangladeshi liberals in the 1970s.

Last week at the East London Mosque, you could have heard the Friday sermon being delivered by a hate preacher who has been banned from Sheffield Hallam university: Assim al-Hakeem. You can watch his sermon on the institution’s own Youtube channel.

Assim al-Hakeem teaches that apostates must be killed:

Q: If truly there is no compulsion in religion,why then are apostates killed?Some end up hating islam and calling untruthful.

A:As long as they have been Muslim, once they reject it, their Devine punishment is execution.

This takes place on the instruction of the ruler after a panel of judges talk to him and try to convince him.

His execution is due to his betrayal to Islam which is like grand treason.

He’d like to see Christians and Jews executed in an Islamic state for “talking against Mohammed“:

Q In case of some Christian or Jew talking against Mohammad(SAWW) etc, then will the penalty be the same in Islam in a Muslim state?

If this was done in a proper Muslim state, the Muslim ruler has to after consulting with the Islamic judge execute them after they are tried and convicted in a court of Islamic law.

He is somewhat anti-gay:

Homosexuality is an illness and something that Allah despises. The Prophet salla Allahu alaihi wa sallam has cursed those who have intercourse with their wives through the anus. The punishment and the consequences of having it with another man is even greater.

You have to fight these feelings as you don’t have any excuse for not doing so. It is something that is not natural. Trying to legitimize it by saying that you were abused when you were a child doesn’t change a thing.

If a murderer justifies his crime by saying he was beaten by a number of boys when he was young, this would not be acceptable from him.

Therefore, try to stay away from whatever reminds you of this filth. Change your friends if they encourage you to do this. Socialize and mix with righteous people in masjids and in circles of knowledge where you can learn the Quran and the Sunnah. This will keep you closer to Allah and away from Satan.

and he is pro-torture:

Q: Dear Sheikh please let us know whether it is allowed in Islam to torture and interrogate criminals or any spy to extract information?

A: It is permissible to beat them to extract information from them

Oh, and he is in favour of sex-slavery. For women, of course.

What a lovely man. What a super institution.

No place for hate, indeed.

UPDATE
Do have a look at a fine collection of Mr al-Hakeem’s wisdom for yourself. Some more pearls:

Christians and Jews? Don’t ever get too close to them!

Is it permissible to take the Jews and Christians are friends in modern times?

Having them as close friends more than the Muslims is not permissible. It is permissible to have them as friends and acquaintances as we work with them and live with them but not to take them as allies and confidants.

Actually they should be made to pay the jizya, a special tax for non-Muslims in an Islamic state. Be grateful for this oppressive discrimination, disbelievers!

The non Muslims in a Muslim country under the rulings of Islam are obliged to pay taxation and this taxation is known as Jizya. This Jizya is not money taken unlawfully from them because of our powers; on the contrary, they are protected by the army, by the government, by every single Muslim because of this money that they are paying.

Remember too that a Muslim must “hate” disbelief, even if the disbelievers are his or her parents. Home is the place for this hate!

Is it true that I may not love my non-Muslim parents?

This is absolutely not true. You love them, respect them and obey them as parents but you hate in them their disbelief and try your best to make them accept Islam.

Really hatred should be the general rule in a terrible kaffir country.

There are two basic conditions which must be met before staying in kaafir countries:

The first condition is: that the person must be secure in his religious commitment, so that he has enough knowledge, faith and will power to ensure that he will adhere firmly to his religion and beware of deviating or going astray, and that he has an attitude of enmity and hatred of the kaafirs and will not befriend them and love them, for befriending them and loving them are things that contradicts faith.

Never mind, the Church of England is very keen on the East London Mosque, like the trade union Unison. 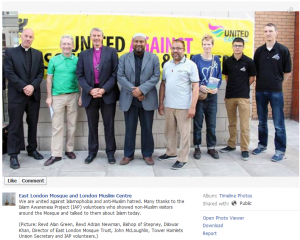 As for women, mutilating their genitalia is “recommended” and Muslims should simply ignore medical opinion.

What about rejecting your husband’s advances? Oh, that’s a sin, and he should divorce you or take another wife.

My husband libido is too high he is requiring me 3 times a day.What can I do?

It is not permissible for a wife to refuse fulfiling her husband’s desire. You should answer his calls as this is not phisically hurting you.

If you can’t do that for no legitimate reason, you are sinful. You should ask him to marry.another woman or to divorce you.

Can a woman lead for example like the Saudi women who are struggling to become political leaders?

No, this is not permissible in Islam whether in Saudi or in any other country.

What about terrorism? Ah, mind the conspiracies against Islam!

There has been always the conspiracy theory, and it’s not us who say that it exists. There is a well-known movie where I heard from people and read about it called sword fish. It talks about the role of intelligence agency on conducting terrorist attacks so that the government increases the funding for the agency. This could easily happen as we said before who is benefiting from these attacks? It is not us. If you go to Indonesia, Egypt you will find the bulk of the Muslims are easy going people. They pray, they fast, they have no interest in anything else but to be good law abiding citizens. They love Allah, they love Islam, and they do what they are commanded to. Who is benefitting from this? It’s definitely not the Muslims and it’s definitely not Islam who are benefitting from this. Someone with a hidden agenda is executing these things. But again we do not want to talk about the role of conspiracy because this could go on forever. Let’s consider the 9/11 controversy, none of those who were alleged to be terrorists ever flew a jet plane, one or two of them had commercial training.