Picking up on Sarah’s recent post about defining terrorism:

Can we all agree that when Texas Republican State Representative Bill Zedler called Texas Democratic State Senator Wendy Davis a terrorist, he was misusing the word?

We had terrorist in the Texas State Senate opposing SB 5 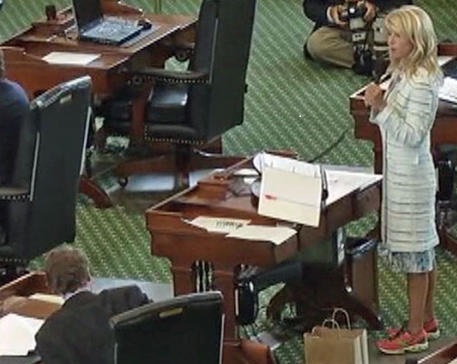 In order to block SB 5 from passing the Senate and heading to Gov. Rick Perry’s (R) desk before midnight on Tuesday, Davis filibustered the legislation for more than 12 hours. Under Texas’ Senate rules, Davis was not allowed to sit, lean against a desk, eat, drink, go to the restroom, or talk about anything unrelated to SB 5 during this time. At several times on Tuesday night, Republican legislators contended that she was breaking the rules of the filibuster. Once, they complained that another lawmaker helped Davis put on a back brace. Later, they claimed that discussions of Planned Parenthood and ultrasound procedures were off-topic.

SB 5 would ban all abortions after 20 weeks of pregnancy, with no exceptions for rape and incest.

[T]he 1973 Supreme Court ruling Roe v. Wade allows abortions up until the point that a fetus can live outside the womb (which is usually considered to be 24 weeks gestation). A dozen other states have already passed laws banning abortion after 20 weeks, but the laws have been struck down as unconstitutional in Arizona and Idaho.

The bill also requires doctors who perform abortions to have admitting privileges at a hospital within 30 miles of the clinic. Finally, the bill requires clinics to comply with building codes designed for out-patient surgery centers found in hospitals, a provision that the bill’s opponents say would force most of the state’s remaining abortion providers to close. Only five of the state’s 42 clinics are expected to be able to comply with the new standards—in a state of 26 million people where women already travel an average of 43 miles to get an abortion. Texas clinics have already taken a heavy financial hit in the last two years, as legislators slashed state funds and refused federal Medicaid money in an attempt to shut down Planned Parenthood providers.

Of course the purpose of these restrictions is not to make abortions safer but to make it as difficult as possible for women to obtain legal abortions– especially low-income women outside of a few urban areas. The effect of the bill would be to shut down nearly all legal abortion providers in Texas. 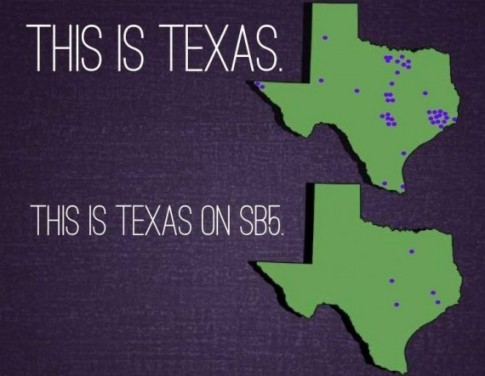 Texas Governor Rick Perry, who supports SB 5, said that Davis— who was a teenage mother and went on to graduate from Harvard Law School– hadn’t “learned from her own example that every life must be given a chance to realize its full potential and that every life matters.”

(He later “clarified” that he was in fact praising Davis.)

It was classic mansplaining — as Elyse Fradkin pithily summarized it on Twitter, “when a man explains to a woman how she should view the meaning of her own life experience.”

Perry has called a special session of the legislature beginning on Monday to reconsider SB 5. With overwhelming support from the Republican majority, it’s likely the bill will pass this time– even though polls suggest a majority of Texans oppose many of its provisions.