Last December I posted about Julie Keith, an Oregon woman who reported finding a letter in a box of made-in-China Halloween decorations purchased at a local Kmart: 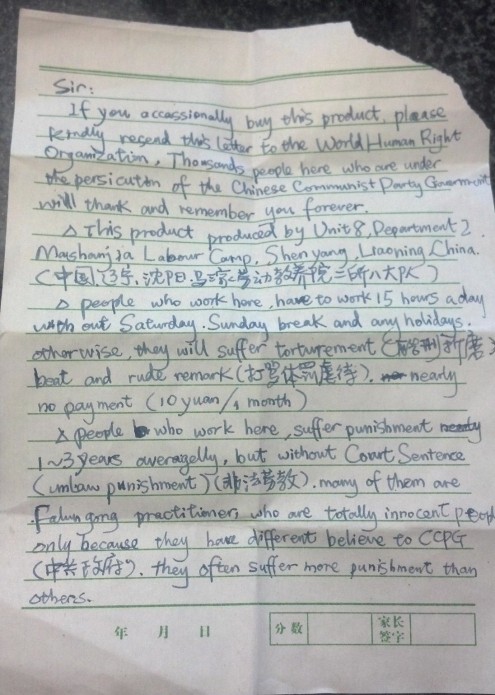 Although I was inclined to believe it was genuine, I didn’t rule out the possibility of a hoax.

Last month, though, during an interview to discuss China’s labor camps, a 47-year-old former inmate at the Masanjia camp said he was the letter’s author. The man, a Beijing resident and adherent of Falun Gong, the outlawed spiritual practice, said it was one of 20 such letters he secretly wrote over the course of two years. He then stashed them inside products whose English-language packaging, he said, made it likely they were destined for the West.

“For a long time I would fantasize about some of the letters being discovered overseas, but over time I just gave up hope and forgot about them,” said the man, who asked that only his surname, Zhang, be published for fear of reprisal.

He knew well the practices of the camp in question, which was corroborated by other inmates, and he spoke as other inmates did of their work preparing mock tombstones. His handwriting and modest knowledge of English matched those of the letter, although it was impossible to know for sure whether there were perhaps other letter writers, one of whose messages might have reached Oregon.

If Mr. Zhang’s account truly explains the letter’s origin, the feat represents one of the more successful campaigns by a follower of the Falun Gong movement, which is known for its high-profile attempts to embarrass the Chinese government after being labeled a cult and outlawed in 1999.

Emboldened by an unusually open public debate in China that has broken out here in recent months over the future of re-education through labor, scores of former inmates have come forward to tell their stories. In interviews with more than a dozen people who were imprisoned at Masanjia and other camps around the country, they described a catalog of horrific abuse, including frequent beatings, days of sleep deprivation and prisoners chained up in painful positions for weeks on end.
…..
Sears Holdings, the owner of Kmart, declined to make an executive available for an interview. But in a brief statement, a company spokesman, Howard Riefs, said an internal investigation prompted by the discovery of the letter uncovered no violations of company rules that bar the use of forced labor. He declined to provide the name of the Chinese factory that produced the item, a $29.99 set of Halloween decorations called “Totally Ghoul” that include plastic spiders, synthetic cobwebs and a “bloody cloth.”

Although he was released from Masanjia in 2010, Mr. Zhang, the man who said he wrote the letter, has vivid memories of producing the plastic foam headstones, which were made to look old by painting them with a sponge. “It was an especially difficult task,” he said. “If the results were not to the liking of the guards, they would make us do them again.” He estimated that inmates produced at least 1,000 headstones during the year he worked on them.

His letter-writing subterfuge was complicated and risky. Barred from having pens and paper, Mr. Zhang said he stole a set from a desk one day while cleaning a prison office. He worked while his cellmates slept, he said, taking care not to wake those inmates — often drug addicts or convicted thieves — whose job it was to keep the others in line. He would roll up the letter and hide it inside the hollow steel bars of his bunk bed, he said.

There it would remain, sometimes for weeks, until a product designated for export was ready for packing. “Too early and it could fall out, too late and there would be no way to get it inside the box,” said Mr. Zhang, a technology professional who studied English in college.His account of life in the camp matched those of other inmates who said they produced the same Halloween-themed items.

Hope you enjoy the next “Made in China” product you buy. And yes, I aim that angry remark at myself too.