The Times of Israel reports:

A French town is scheduled to host a ceremony on Wednesday honoring several Palestinian terrorists.

Among the terrorists are Allam Kaabi and Salah Hamouri, who are are scheduled to appear at the Bourse de Travail building, which belongs to the municipality of St. Denis, a suburb of the French capital.

Kaabi, of the Popular Front for the Liberation of Palestine (PFLP), planned and carried out the 2001 assassination of Israel’s tourism minister, Rehavam Ze’evi. Hamouri, also of the PFLP, was arrested for plotting to assassinate Sephardic Chief Rabbi Ovadia Yosef. Hamouri was one of the 1,027 prisoners exchanged in 2011 for Gilad Shalit, a citizen of France and Israel. He is scheduled to appear at the Sait-Denis event.

The event is organized by the “national collective for just and viable peace between Palestinians and Israelis,” a group known by its French acronym CNPJDPI. Also present will be a representative of Amnesty International, Martine Brizemur, according to a statement by the organization. The men scheduled to speak are described as “recently released prisoners” in the statement.

The list of speakers is also available on the Demosphere website, where Brizemur is described as an Amnesty activist. 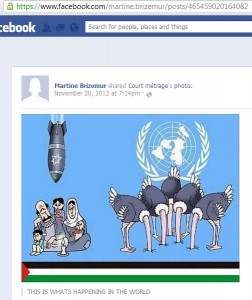