George must be seething with jealousy now that Rodman seems to have made a new BFF. 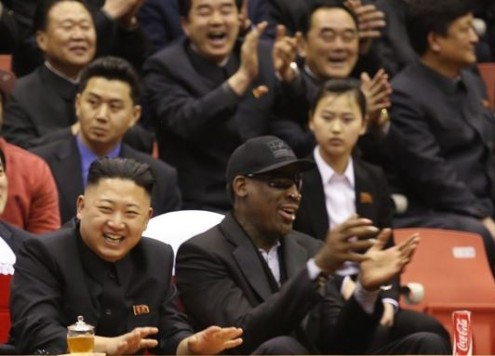 Yes, that’s Rodman and North Korea’s Dictator for Life (and perhaps beyond) Kim Jong Un sitting courtside at a basketball game in Pyongyang.

“You have a friend for life,” Rodman told Kim before a crowd of thousands at a gymnasium where they sat side by side, chatting as they watched players from North Korea and the U.S. play, Alex Detrick, a spokesman for the New York-based VICE media company, told The Associated Press.

Rodman arrived in Pyongyang on Monday with three members of the professional Harlem Globetrotters basketball team, VICE correspondent Ryan Duffy and a production crew to shoot an episode on North Korea for a new weekly HBO series.

Having fawned before anti-American dictators in Iraq, Syria, Cuba and who knows where else, Galloway would surely love the chance to add lil’ Kim to his list.

Think Progress reminds us that while some may find this grimly amusing, there is nothing particularly charming or encouraging about the whole business.

Likewise the plight of North Korean citizens likely was not a topic of conversation between Rodman and Kim. Satellite imagery shows that one of North Korea’s many prison camps has been greatly expanded over recent years, likely due to an increase in occupants. These camps — which can now be viewed on Google maps — are home to up to 200,000 alleged political prisoners and others who require “reeducation.” Former prisoners have produced graphic drawings depicting the horror of life in these camps.

All of this doesn’t even touch issues involving the prioritization of military spending over feeding civilians or the propaganda against the United States that North Korea develops. Rodman’s trip does, though, prove that North Korea’s new 3G internet system only for foreigners is working just fine and helps bolster the government’s claim that tourism is booming. Neither of these are good things, leaving the comparison of Rodman’s visit to the “ping-pong diplomacy” of the 1970s between the U.S. and China indefensible.