Khalid Al-Fikri is an Egyptian Islamist preacher who has found refuge in the UK.

He has abused his new home by spreading hatred and intolerance wherever he can.

This makes him a perfect guest for the East London Mosque’s London Muslim Centre, where he is due to speak on the 16th of March. 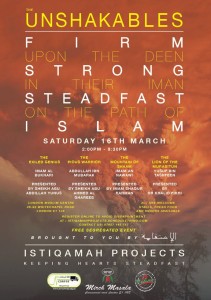 This post documents the depravity of Fikri’s messages to British Muslims.

Supporting convicted terrorists
This short clip is an excellent picture of the man and his circles. It was recorded last year at a demonstration in front of the US Embassy in London. The cause was Aafia Siddiqui. She is the al-Qaeda operative and raving antisemite found guilty in 2010 of the attempted murder of American and Afghan soldiers and officials.

For Fikri, the verdict of an open court against “our sister” is simply not acceptable:

The main purpose today [is] that we remember our sister Aafia Siddiqui. She is one of the victims of this dictator regime of America. She is not the only one who is suffering a lot with this injustice and the barbaric treatment of the Americans towards the Muslimeen [Muslims]. Aafia Siddiqui is an innocent doctor woman, very respected. And instead of praising her, they put her in jail, and she is sentenced for life [in] prison. This is something which will not be accepted and it should not be accepted at all.

Fikri is not incensed about Siddiqui alone. His problem is America itself:

Furthermore, Omar Abdel Rahman too must be freed. He is the “blind sheikh” convicted in 1995 for his leading role in foiled New York bombing plots which the judge in the case said “would have resulted in the murder of hundreds if not thousands of people”. For Fikri, the blind sheikh is instead “noble” and President Obama must be threatened for his conviction:

We remember our noble sheikh, sheikh Omar Abdel Rahman, the Egyptian imam and scholar of tafsir [interpretation] and Qur’an, who has been jailed in America for 18 years. And he is sentenced also for prison for whole his life [sic].

America, by doing this, it is inciting and raising the hatred with all the Muslims all over the world. Now we have to say it loudly. For America, that is enough. And we can say to Barack Hussein Obama “don’t think that you will escape from justice in this world as well as justice in the next life”.

Fikri then adds a line worthy of al-Muhajiroun:

Islam is coming back and Islam will rule the whole world.

Plus a threat to the makers of the “Innocence of Muslims” film:

What’s happened recently regarding the dirty film against our prophet Mohammed, it is only an indication for the end of those dirty, dirty human beings when they insult our prophet in such a movie.

Fikri pitches in for terrorists held in the UK too. These quotes are from a speech last year outside Belmarsh prison at an event held by extremists in solidarity with their “brothers” inside:

Here in England, our brothers just a few metres inside the jail, inside the prison. Why? For what reason? And why these whole [sic] years, keeping them behind the bars? Abu Hamza, Abdel Bari, Abu Qatada, and others. Khalid al-Fawwaz and Babar Ahmad and there are many, many others.
…
We ask Allah to free our brothers and we wish to see them with us in the Eid.

Hatred and demonisation of Shia Muslims
Another cause enthusiastically pursued by Fikri is vicious hatred of Shia Muslims. In this speech on “The Agenda of the Shia”, he says:

Killing the Sunni is to raise your rank in paradise. Raping a Sunni woman is a matter that pleases Allah. Shia are one of the worst and greatest enemies against our ummah [community of believers] nowadays.

Whoever made that clip added terrorist imagery and the sound of gunfire and explosions as an introduction. This is the kind of violent and dangerous hatred Fikri inspires.

In this talk, Fikri lets the insults fly. The Shia are an:

ignorant kaffir [derogatory term for non-Muslims] sect
…
The Shia have no relation to Islam.

Furthermore, the Shia are allies of the Jews and the West against Islam:

That tirade was delivered at Al-Muntada, an extremist Islamic centre in west London. Al-Muntada has been repeatedly championed and invited to Parliament by Labour MP Andy Slaughter.

In this speech in London, Fikri presents a deranged “Syria is in league with the Jews” line:

They are the best allies to the Zionists in Israel within the last 40 years, since they came in power, they put their hands with the Zionists.

He also casts the Shia as eternal enemies of real Muslims:

The Shia are against Islam! The Shia always put their hands with the enemies. The Shia in all the history were corrupted, killing the Muslimeen from their backs.

Support for Hamas
The terrorists of Hamas, by contrast, are Islamic heroes for Fikri. He is practically ecstatic in this video message about the Gaza war of 2008-9, which was produced by one of the outfits of hate preacher Haitham al-Haddad:

Now, it is the victory inshallah which we all see, and the hope that Allah will be send [sic] his victory to those our brothers who are fighting, and those who are mujahideen [holy warriors] on the path of Allah.

Western freedom is poison
In the same talk, Fikri rails against western democracy and freedom, which are as bad as Shias and Sufis:

Don’t be misleaded [sic] and misguided with those kaffir people who says it is freedom and you are a free man. They are kuffar. And when they say, and poison your mind with the word freedom, they mean there is no God. “Do whatever you want.” Because they are kuffar.
…
You need to protect your deen [religion] and iman [faith] because there are many things which will affect you, will come against you. Somebody will say to you “democracy, socialism, freedom”. Some may take you to Sufism. Some will talk to you about Qadiyaniyya, Ahmadiya. Some may wash your brain. Shia!

Women: celebrate your subjugation
On and on Fikri goes in the same anti-Western talk. Muslim women must be particularly wary:

And again for my sisters. Don’t be misguided. Don’t be misleaded [sic] by the kaffir theories and attitudes. You are very free when you are home with your husband and your kids.
…
Don’t say “I am a free woman, I want to run house, I want to work, I want to get money”. No! This is the duty of your husband.

Sharia rules
What Muslims must demand is not freedom but sharia law, Fikri says in a talk on Myanmar, where Muslims are surrounded by “an ocean of kaffirs” and the kaffir UN will not help them.

We want to be ruled by Islam. And the ruler should be a Muslim. There is no way for a kaffir to rule over Muslimeen.

Lies and their buyers
Don’t forget the latest lie of the East London Mosque:

The East London Mosque is committed to building co-operation and harmony between all communities in this borough.

Hosting Fikri shows just how hollow that statement is, and he is but one of countless extremists welcomed by the mosque for years on end.

The mosque should be shunned, yet many still court it.

In fact it is an honoured partner of the next meeting of far left “anti-racists” and trade unionists. Andy Slaughter MP will be one of the speakers at that event.