Today the SWP’s National Committee is to debate the crisis. The SWP CC will not be amused that the motions for debate have been published on the Socialist Unity blog. The first motion is from the Central Committee itself. They are clearly desperate for the debate to be dropped and they are threatening disciplinary action against the opposition:

4) We therefore condemn the actions of those members who have circumvented these principles by campaigning to overturn conference decisions outside the structures of the party, using blogs and the bourgeois media. Many of these contributions have been characterised by the use of slurs, abuse and un-comradely language that seem designed to stop serious debate and make joint work impossible, as well as damaging the party’s reputation.

5) This undermining of our democracy should stop forthwith. We reaffirm the right of the Central Committee to impose disciplinary measures for violation of our democratic constitution.

The second motion is from SWP stalwart, Sue Caldwell, doing her best impression of Soviet show trials chief prosecutor Andrei Vyshinsky.  She encourages the Central Committee to expel the opposition unless they shut up. The third motion is from the South Yorkshire District Committee who are sucking up to the CC and think it is better to talk about “the protests in Sheffield against austerity cuts,” than an alleged rapist in the party’s own midst whose alleged crime was investigated and exonerated by a jury comprised of his mates. Motion four is a rather tame motion which calls for Delta to stand down from any “paid or representative roles” in the party. The motion also wants no punishment for the opposition members who have kicked up a fuss. It does not argue for the sacking of the current CC for their actions and defence of their actions. The remaining motions are sycophantic to the CC.

Rumours are the opposition will get smashed but this will not be the end of it. One of the commentators below the line to the Socialist Unity post declares all of this to be ” The new longest suicide note in history!” I hope s/he is right.

There has been further comment in the press and on the blogs about the this scandal. Worthwhile reading is former Tribune editor, Paul Anderson. He concludes: “Now the [SWP] is a laughing-stock: no one will even talk to them after all this. I’m not mourning, but it’s worth noting. British Leninism is finished.”  I hope he is right. There was a double page spread in yesterday’s Daily Mail slating the party for the handling of the rape allegation. The headline was “A show of hands! That’s how the Socialist Workers Party cleared a comrade of rape.” The article went on to name and shame a number of the members of the Disputes Committee which exonerated Comrade Delta. Finally, Nick Cohen has got his act together and written an article on the subject for the Observer. Cohen interviewed former member Anna Chen. She told him:

“I was struck by how sexless and ugly the leading men in the SWP were. But they always had women. If you slept with one of them, they promoted you. It was as basic as that.”

Many leftwing commentators …. point out that the revolt in the SWP is led by Richard Seymour, a puffed-up political hack, who is just as totalitarian as the apparatchiks he seeks to replace. To their mind, the battle in the party is like a battle in the BNP: no good outcome is possible.

I am personally inclined to be in that camp, but I do believe there is a possible good outcome, one whereby the SWP simply implodes and we hear no more from them. Sadly, I think the party, albeit battered, will survive in some shape or form. But what shouldn’t be forgotten is what Cohen mentions: “The SWP wants to abolish democracy and establish a dictatorship.” This is just as true for Richard Seymour as it is for  SWP National secretary, Charlie Kimber. 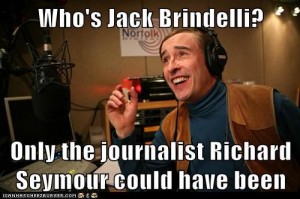 The response of the Seymourite faction can be read here.