Here’s a case in point.

Between 2005 and 2009, the Secretary of State for Culture,Media and Sport, Maria Miller MP,  claimed 90,000 GBP in parliamentary expenses in respect of a house in south London where her parents’ lived.

The Telegraph has been investigating  further. When they called up her office, this is what they were told by her SPAD:

“Maria has obviously been having quite a lot of editors’ meetings around Leveson at the moment. So I am just going to kind of flag up that connection for you to think about,” said Miss Hindley.

In fact, reporters had a brief conversation with Mr Lewis in order to establish how long he had lived with Mrs Miller. Over the course of the conversation, Mr Lewis said he enjoyed reading The Telegraph.

Mrs Miller also contacted The Telegraph to complain about her parents being approached.

“Irrespective of whatever you are investigating, I cannot see a justification for this family intrusion. I should be grateful if you could confirm that you now understand the basis of my concern and that on reflection this could have been handled differently,” wrote Mrs Miller.

She also claimed that the journalist had not identified herself at the start of the conversation, which was inaccurate.

Update: Remember this?  In reponse to her probity being questioned by Priti Patel with regards to her family shares in Stemcor, Margaret Hodge wrote this letter: 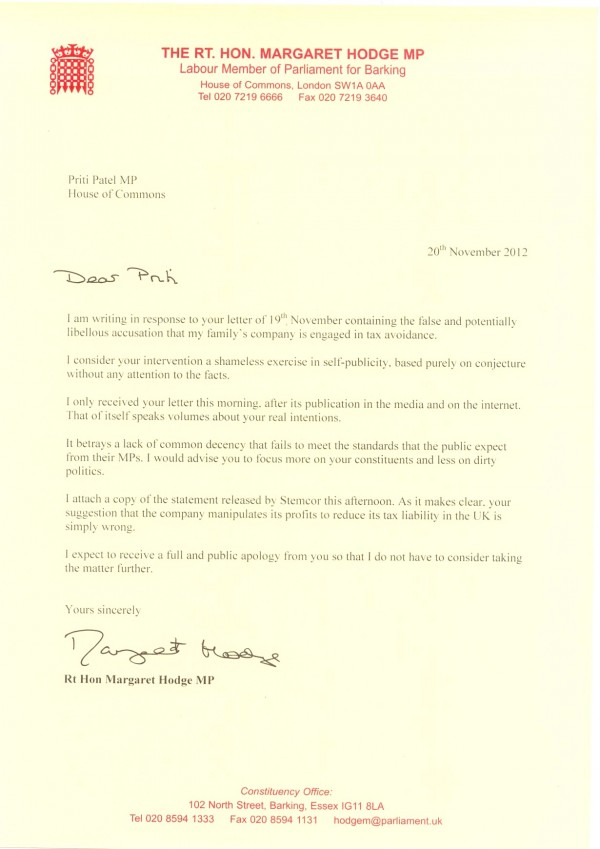 Hugely unimpressive both in intent and delivery style. After compelling the Daily Telegraph to remove the online reporting of Patel’s letter, Hodge is threatening another MP and anyone else repeats the allegations with a libel writ.