Islamophobia Watch is a strange place. While it rightly highlights unfair discrimination against Muslims, it also makes a habit of defending the far-Right.

As is often the case with elements of the far-Left, it (like many of its opponents on the Right) applies different standards to Muslims.  The message of the Islamic far-Right is somehow worth defending while the message of the nationalist far-Right is not. Where anti-Islam groups see Muslims as a group who can do nothing right, IW sees Muslims as a group unable to do wrong. This is a bit of an exaggerated description of the two sides but both positions are of no help to Muslims in Britain.

IW takes the daft view that if any violent, anti-Muslim nutcase shares your opinion on, say, Zakir Naik’s bigoted remarks towards non-Muslims, then you are responsible for any action that follows from the nutcase in question. Objecting to Muslims who express nasty views also makes you ‘anti-Muslim’. If everyone adopted this stance then opposing the National Front would make you ‘anti-white’ and Stop the War Coalition could be accused of giving Anjem Choudary a leg up as he agrees with their position on foreign policy.

IW will often take the side of hardline, intolerant Islamic groups and individuals over anti-extremist Muslims. The most recent example of this is the defence of the Saudi charity organisationAl-Muntada against Hasan Afzal, Director of inter-faith organisation Stand for Peace.

Hasan Afzal’s  ‘call to action’ against Al-Muntada’s line up of loony bigots at the very nice indeedGrand Connaught Rooms prompted IW to contact the venue and fight AM’s corner:

“I had emailed the Principal Hayley Group myself, urging them to reject calls to cancel the conference”

The subsequent cancellation of the event irritated IW enough to warrant a follow up email:

“I emailed back saying that I couldn’t understand how a conference organised by an entirely peaceful body like the Al Muntada Trust could have compromised the safety of staff and guests at the Grand Connaught Rooms.”

IW’s objection to the cancellation of the conference uses the silly ‘others agree with you’ argument again, placing blame on the initial ‘call to action’ receiving ‘an enthusiastic response from the racist thugs of the English Defence League and the associated hooligan group Casuals United.’

This doesn’t explain IW’s need to defend Al-Muntada and it’s message though. Surely if you reallyobjected to all bigoted and intolerant views you would take up a position somewhere in the middle.

IW’s description of Al-Muntada as an “entirely peaceful body” could be taken as AM propagating a tolerant understanding of Islam. The truth is that they follow a very narrow, literalist interpretation of the religion and have been criticised  for spreading Wahhabi ideology in Africa:

“Al-Muntada has, incidentally, been particularly active in promoting Wahhabi style Islamism in Nigeria. As explained by a Sufi of Kano state, “before al-Muntadacame to Kano there had been little or no inter-religious conflict…Now…we are almost on the verge of civil war.” Al-Muntada, he explains, pays for Nigerian clerics to be “brainwashed” in Saudi universities and imposed on Nigerian Muslims through its well funded network of mosques and schools.”

“In early 2004, an armed group calling itself the “Taliban” launched a rebellion in the northern frontier state of Yobe. After the army put down the uprising, it discovered that the group had been funded by the Saudi al-Muntada al-Islami ”charity” whose other “good works” include educating aspiring African clerics in Saudi institutions and setting them up in its own network of mosques and schools back in their native lands upon graduation.”

Sufi Muslims and Christians in Nigeria would probably disagree with IW’s description:

“Government security agents in Nigeria have reported the arrest of a Sudanese Muslim businessman who heads a Saudi Arabia-funded charity in connection with financing bloody Islamic attacks on Christians. Sheik Muhiddeen Abdullahi, director of Al-Muntada Al-Islami Trust, was arrested on February 20 in the northern city of Kano following “the discovery of financial transactions running into millions of dollars between him and an Islamic fundamentalist cleric, Alhaji Sharu, in Kano,” an official of the State Security Service said. Trust funds have reportedly gone to propagate the Wahhabi sect of Islam in Nigeria and to finance a fundamentalist Muslim uprising in December 2003 which left two policemen and a dozen militants dead and thousands of Christians displaced. When authorities released Abdullahi 10 days after his arrest, more than 5,000 Sufi Muslims protested, calling for the immediate closure of Al-Muntada Al-Islami Trust offices and demanding that the Wahhabi sect be banned from the country.”

Haitham al-Haddad spent four years as Imam at Al-Muntada mosque where he gave his now famous sermon on Jews:

“We must reflect on the reality of the conflict between us and the Jews, the enemies of God, and the descendants of apes and pigs.

O brothers! The conflict between us and the Jews is religious, historic, civilizational, and infinitely complex; it is not bounded by time or place, and it has more than one dimension.

Did Allah not commands us to seek refuge from the devils of mankind and the jinn? Indeed, the devils of mankind are perfectly represented by these Jews. Do their Protocols (of the Elders of Zion) not say: “We must seduce the world with women and wine, through gambling and recreation, and if this is not sufficient then their reality will testify to this.”

O brothers: their weapons in this battle are like the weapons of Satan: all kinds of desires, money, women, alcohol, games, media, so-called sports and art. All of these are amongst their weapons.”

AM’s hardline literature earned them a slot in ‘The hijacking of British Islam’ and their events have featured all the big names on the far-Right from Khalid Yasin and Assim al-Hakeem to homegrown nasties  like Murtaza Khan.

In the disputes that are forever raging within Salafi circles AM are accused by some of being Qutbis, followers of Sayyid Qutb’s teachings. It’s a pretty baseless accusation but google will provide lots of examples of angry men putting the boot into AM, if that’s your thing.

To top it off, Al-Muntada comes recommended by king of the mermaid fatwas and complete psycho Muhammed Salih ‘Al-Munajjid.

Personally I don’t want to see anyone banned from speaking at events whether they are National Front or Wahhabi fruitcakes unless they are calling people to engage in acts of violence. It’s unlikely IW would be writing to anyone pleading with them to give a platform to speakers who held horrible views on Muslims. IW’s position on AM makes no sense.

IW won’t fool many people into believing that Al-Muntada are the good guys and the people at the Grand Connaught Rooms obviously didn’t buy it. It’s just unfortunate that too many on the far-Left take up a similar position of defending people on the far-Right when they happen to be from a minority group.

To finish off on a funny, here’s Al-Muntada’s old website making some bold claims: 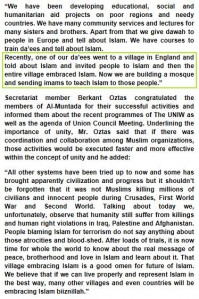 INVESTIGATIONS into activities of the dreaded militant Islamic sect, Boko Haram have led operatives of the State Security Service (SSS) and its collaborative local and international agencies into the sources of funding of the dreaded sect.

Information at the disposal of Nigerian Tribune indicates that operatives were told that the group had received funds from some Al-Qaeda-linked organisations based in the middle East.

However, the operatives were said to have made a shocking find, which confirmed that the group actually received funding from a United Kingdom-based (UK) organisation.

It was gathered that leaders of the sect already arrested had opened up by giving some strategic information, especially on the funding of the dreaded organisation.

Sources confirmed that while the organisation relied on donations by its members in its earlier days, its links with Al-Qaeda in Islamic Maghreb (AQIM) opened it to fundings from groups in Saudi Arabia and the UK.

According to the sources, different confirmations coming from sources in Boko Haram had indicated clearly that a group known as Al-Muntada Trust Fund, with headquarters in the United Kingdom, had extended some financial assistance to the sect.

Bob Pitt must be very proud of himself. He’s defending a group whose associations are even more violent and dangerous than the EDL or the BNP.