A couple of weeks back, habibi alerted us to a conference backed by a number of extreme organisations, including the iERA and Al Muntada, whose hate preacher fest was cancelled yesterday by the Grand Connaught Rooms.

The conference is scheduled for this Sunday at Arsenal Stadium. It features the hate preacher,  Abdur Raheem Green, and also featured “Breivik Left” Labour MP, Jeremy Corbyn, who never misses an opportunity to share a platform with the sort of hatemongers who make the British National Party look like the Liberal Democrats.  Wasim Kempson, an imam at Al-Muntada mosque, is also a scheduled speaker. 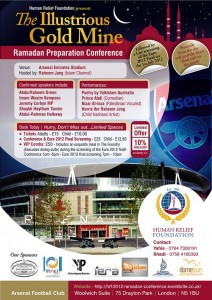 After reading habibi’s  report, commenter amie prompted her Arsenal season ticket holder “DH” to write to Arsenal, which he did, having enlisted several of his Arsenal supporting colleagues to do likewise.

Yesterday, he was telephoned by the Arsenal press people and was thanked for his letter.

He was informed that as a result of his and ‘many other’ complaints they have taken the matter up with the organisers and have been given the undertaking that Abdur Raheem Green will not be attending this so-called ‘family conference’.

I have to say, though – would Arsenal continue to host a “family conference” booked by a group like Combat 18 or the British National Party, once they’d been made aware of its true nature?