“My son Mikalai is here with me and it means we have a person to pick up the baton in 20-25 years.”

–Aleksander Lukashenko, president of Belarus, aka Europe’s Last Dictator, on a visit to Hugo Chavez in Venezuela 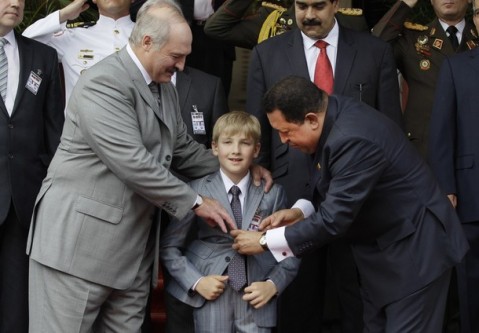 Based on events of a year and a half ago, I suppose that settles that. President Lukashenko’s son is now seven years old.

Hugo Chavez thanked Lukashenka for visiting Venezuela and expressed his warm words to “the hardworking, modest, jolly and heroic” people of Belarus.

You can see some of Belarus’s heroic– but less than jolly– people being assaulted by police for protesting the dubious results of the 2010 election that returned Lukashenko to power.

On a 2006 visit to Belarus, Chavez declared, “We see here a model social state like the one we are beginning to create.”

Given the probability that he is dying of cancer, it’s unlikely that Chavez will be able to follow Lukashenko’s example and transfer the presidency of Venezuela to his 14-year-old daughter Rosines. However her political future may have been compromised early this year when she posted a photo of herself on the internet flashing United States currency– despite her father’s strict controls on other Venezuelans’ access to it.