What an exciting month it has been for the Palestine Solidarity Campaign! Its chair Hugh Lanning, who is also the deputy general secretary of the trade union PCS, and his comrade Sarah Colborne finally got to meet to meet the Hamas heroes in Gaza.

Lanning is second from right in the photo below, having a grand old time with Hamas UK operative Mohammed Sawalha. Colborne is fourth from right, beaming at Haniyeh. 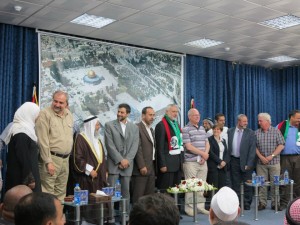 Also in the picture, to Haniyeh’s right, are Zaher Al-Birawi, another Hamas UK operative, and Mohammed Kozbar, the chairman of the Finsbury Park Mosque. Kozbar is smiling with Jordanian Muslim Brotherhood leader Hammam Saeed, who called the convoy “a new page of the Jihad against the occupation of the Palestinian territories”. This comment was gratefully noted by the “armed wing” of Hamas.

The group went to Gaza with a “Miles of Smiles” convoy, the material and political Hamas support operation led by Interpal, Britain’s dedicated Hamas service bureau. Interpal’s vice chairman and managing trustee Essam Mustafa is also in the picture above, behind Colborne.

Here are Lanning and Colborne at another session with Hamas. 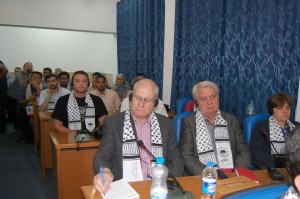 This is what they were looking at – notorious Hamas hardliner Mahmoud Al-Zahar and his fellow Hamas leader Khalil Al-Hayya feting Interpal’s man. 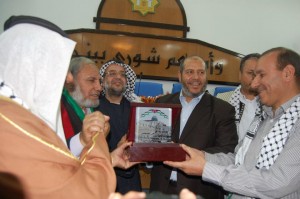 Here is Lanning at the podium at yet another session, flanked by Jordanian Brother Saeed, Al-Hayya of Hamas, and Essam Mustafa of Interpal. 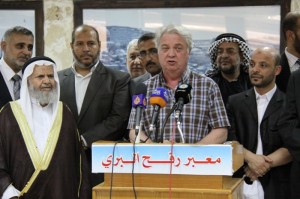 Once back in the UK, it was time for Colborne to receive an award from the Palestinian Forum in Britain (PFB). Here she is with Zaher Al-Birawi and Hafiz Al-Karmi of the PFB. 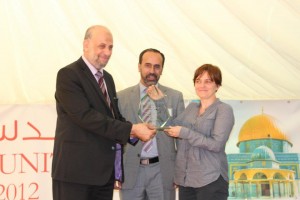 Her company at this meeting included Azzam “Kaboom” Tamimi. 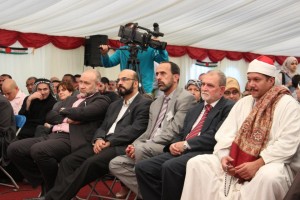 The PFB is a horrible group that invites one hate preacher after another to Britain. The roster includes Muhammad Musa Al-Shareef, who wants Muslims to be proud of terrorist attacks on Israeli civilians; Ahmad Nofal, a Holocaust denier who also supports the murder of Israeli civilians; Wagdi Ghoneim, a fanatic for jihad; and Raed Salah, the blood libel sheikh.

It is very clear that the PSC likes to join up with some of the worst antisemites and supporters of terrorist murder out there.

So who wants to join up with them and host them?

All sorts, including Labour MPs, churches, the managers of Quaker meeting halls, and academics.

This should end and the PSC should be treated like the BNP.

On the mainstream British left, this will probably never happen.