A great deal of fuss has been made about today’s handshake between Martin McGuinness, the deputy First Minister, and Her Majesty the Queen.  Here it is. Mr McGuinness looks relaxed, and the Queen looks both happy and glorious. 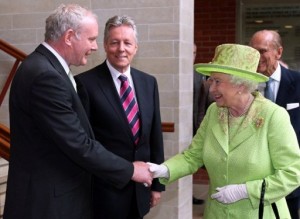 In fact, the cordial handshake reflects the views of the majority of Catholics living in Northern Ireland:

As reported in yesterday’s Belfast Telegraph, a major survey has found that the majority of Catholics polled now do not want reunification.

The Life and Times survey claimed 52% of Catholic respondents wanted to remain in the United Kingdom, with just 33% admitting to wanting a united Ireland.

The next step is accelerate the desegregation of schools and institutions as fast as possible.