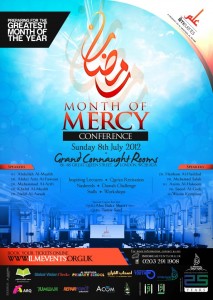 Stand for Peace has tried to speak to the management of the Grand Connaught Rooms to ensure they know of the consequences of giving Islamists a platform (as per the Prevent review). However, one senior member of management told Stand for Peace: “[it] didn’t bother me at all”.

Urgent action is required to convince the Grand Connaught Rooms to put decency before profit and to pull the plug on the conference. You can call the venue on +44 (0) 2074 057 811 – ask for Oliver Six, the General Manager.

The owner of the venue is the Principal Hayley Group, based in North Yorkshire. The number for Principal Hayley is +44 (0) 1423 853 800 – you can ask for Tony Troy (Chief Executive Officer) or Colin Bailey (Group Operations Director)

The event is organised by the Al-Muntada Trust, a London-based Islamist group. It has an extensive record of hosting and boosting some of the UK’s worst hate preachers over many years.

Here’s a preview of some of the speakers at the upcoming event:

Al-Fawzan is a Saudi professor of Islamic law. A popular figure on Saudi television, al-Fawzan has glorified jihad in Iraq, saying:

Jihad is an individual duty applying to the Iraqi people. They need to wage this jihad against this enemy until it leaves their country.

In an interview on Saudi television, Al-Fawzan whipped up anti-Christian hate:

Al-Fawzan has condemned homosexuality, calling it ‘an abomination’. He has ‘blamed’ homosexuality on ‘Western values’:

Some people want to Westernize our society in any possible way, but they know that if they advocate fornication, forbidden sexual relations, and homosexuality, the people would stone them. So what do they do? They come up with these deviant fatwas, which lay the ground for these crimes and abominations.

Al-Arifi is a prominent figure on the international islamist circuit. He is an antisemite and a sectarian who glorifies jihad. Consider this line:

Devotion to Jihad for the sake of Allah, and the desire to shed blood, to smash skulls and to sever limbs for the sake of Allah and in defense of His religion, is, undoubtedly, an honor for the believer.
…
Allah said that if a man fights the infidels, the infidels will be unable to prepare to fight [the Muslims]. By Allah, the infidel countries today – the US and its allies – dare to fight the Muslims, to rape their women and turn them into widows, and to inflict their corruption on Islam and the Muslims on a daily basis only because they see that the Muslims do not even consider fighting the infidels and conquering their countries.

Al-Arifi loathes Shia Muslims, calling them “evil” and saying they “set traps for monotheism” by “spread[ing] their false doctrine to the ignorant among the Sunnis”. Saudi Shias, he says, are “amassing weapons” with the support of Iran in order to carry out attacks on Saudi Arabia and take it over. For Al-Arifi, top Iraqi Shia cleric Ali Al-Sistani is nothing less than an “atheist and debauched.”

As for Israeli Jews, for Al-Arifi there is nothing to do but fight and kill them:

What was taken by force will be restored only by force, as conveyed by the Prophet Muhammad, who said: “You will fight the Jews.” He did not say: You will conduct negotiations, they will make concessions, and then you will make concessions, and then we will reach a compromise and divide Jerusalem… By God, Jerusalem will not be divided. He said in the hadith: “You will fight the Jews and kill them.” It was the Prophet Muhammad who said this, not me.

Haitham al-Haddad is a Palestinian born hate preacher. He was an imam at Al-Muntada for many years and still speaks there regularly.

In the past Haddad has justified suicide bombing, supported female genital mutilation, made antisemitic remarks and promoted Islamist supremacism. He is amongst the worse hate preachers in the UK and is a favourite of radical Islamic student societies all over the country.

He describes the killing of Muslims by other Muslims, in the event of a suicide bombing, as ‘unintentional’:

This category is mentioned in what the scholars call at- Tatarrus, which permits Muslims on the battlefield to kill a group of non-Muslims if they are using Muslims as a type of shield and there is no other way to get at them. This way, even if it leads to the killing of some Muslims, as long as non-Muslims are killed, is permissible a fortiori. Thus it is understood that, although these people were not fighting, one may kill them unintentionally…

Haddad is on record telling an audience: “I will tell you the truth about the fight between us and Jews who are the enemies of God and the descendants of apes and pigs”

This course was a 3 day intensive program organised by the Muslim Research and Development Foundation headed by Sheikh Haitham Al Haddad.

The MRDF committee includes students from Madinah. University and Professional from a variety of backgrounds. The course Manhaj Al Istidhlal was the ﬁrst 3 day intensive retreat organised by MRDF and alhamdulillah I was one of the pioneering students. The course is actually in 3 parts and the 2 parts are to come in the near future. We studied the sources of Knowledge in Islam. We looked at the Quran, Sunnah, Ijma and Qiyaas. The course also included sessions on build many team building and media skills sessions. The other two parts of the course will look at the understanding and implementation of the sources. Alhamdulillah, I passed the course with a Distinction.

Nabil Al-Awadhi is a prominent Kuwaiti Islamist preacher. He reaches large audiences by way of satellite television broadcasts from the Middle East. Many of these broadcasts are taped by viewers around the world, including in Europe, and uploaded to Youtube and other video sharing websites.

According to Al-Awadhi, even video games must be part of the Islamic response to the enemies of Islam. They should allow players to “slaughter Jews”:

The Washington-based Middle East Media Research Institute, a nonpartisan group that translates Arabic language television and Web sites, says that in June, Sheik Nabil Al- Awadhi, who has a weekly show on the Kuwaiti channel Al- Rai TV called “Sa’at Saraha” (“An Hour of Sincerity”), spoke of the need for Islamic games that compete with Western games. He also suggested developing a game in which the Muslim player “slaughters the Jews and liberates the Al-Aqsa Mosque.” In the West, they turn their wars against Muslims into games, he said, and Muslims should do the same.

Homosexuals and emos are regularly targeted for vicious persecution in the Arab world. But they can expect no sympathy from al-Awadhi, since they are “the greatest danger” to society:

In a novel interpretation of regional events, meanwhile, Al- Awadhi also suggested during the programme that homosexuals and ’emo’s,’ or fans of the ’emotional hardcore’ genre of rock music, from the region are the greatest danger to regional society, referring to the two groups as those “for whom the bell tolls.

Al-Awadhi said that he holds the media responsible for this subversive and previously unknown phenomenon, accusing local media of marketing homosexuality and the ’emo’ culture in programmes broadcast both before and during Ramadan, although he did not name the programmes in question.

For al-Awadhi, Europeans are worse than animals:

“As for the Europeans’ relations with the Creator, animals are better than they are… for they do not permit what is permissible, and do not forbid what is forbidden. Moreover, whenever they find a way to please the Devil, they pursue it. I do not believe that Satan [ever] imagined that his temptation of humanity would [yield] such an extent of heresy as well as moral depravity and decay.
…
I do not write this article out of hate or resentment, though, by Allah, I do hate the infidels among them. I have written this article in fairness, so that those who are impressed with the West will not be deluded and will not think that I am dazzled by the Europeans. For, as I have said, their bad qualities are innumerable. By Allah, even one Muslim who worships Allah is better than all the infidels in the world, even if their appearance impresses some people.”

Stand for Peace is finalising a dossier with a more comprehensive profile of the hate preachers and their comments, but the above should give you a taste of what to expect.

The Grand Connaught Rooms have refused to even meet us to discuss our concerns. The company clearly doesn’t care about Prevent guidance. This is the advice the Prevent Strategy gives to private organisations:

Where conferences and speaker meetings involving propagandists are taking place in universities and colleges, communities and privately- owned locations, authorities – including the police – should always be ready to brief the owners and ensure they understand what is taking place.

This conference will feature preachers whose vicious views could easily drive people to implacable hatred or even violence – don’t let that happen – please pass this information onto family and friends – give the venue a call, let them know what you think of the Grand Connaught Rooms giving a platform to jihadist preachers.