Update: Sizer has deleted the post. Here it is. Try the Google Cache too. And this screenshot. 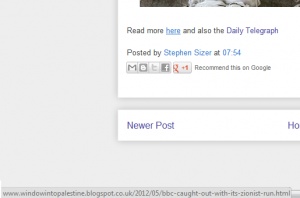 Since his most recent trip to Iran, Stephen Sizer has taken sides on the Syrian conflict, interviewing someone claiming to be a childhood friend of Assad, who is

“confident that the Kofi Annan report will exonerate the Syrian government and that the external forces seeking to destabilise Syria will not succeed.”

Thus, Sizer has gleefully pointed out that the BBC mistook an image of the Houla Massacre with an image from Iraq a few years ago. The story was covered in the Daily Telegraph. However, Sizer prefers the coverage of Peter Eyre, linking to his piece on the antisemitic website Window Into Palestine.

As I have previously reported it is the west that is inciting unrest in Syria by openly arming and funding undisciplined militia with the added fact that the US, UK, Israel and France have their own special forces operating within Syria who are backed up by Intel Operatives from the CIA, MI5/6 and Mossad etc…..not forgetting security companies such as Blackwater.

Eyre also thinks that Zionists are behind a New World Order, and that he can sniff out Mossad agents posing as hitchhikers.

On the website Sizer linked to, you can see this image: 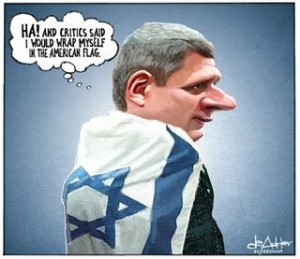 Window Into Palestine republishes the antisemitic forgery The Protocols of the Elders of Zion, cross-posts from Jew Watch, and calls the Holocaust the “Hollowcause.”

A spokeswoman for the diocese of Guildford said: “Dr Sizer has always made clear that he denies racism and anti-Semitism and regrets any hurt that may have been caused by his drawing attention inadvertently to a website that contains offensive material.

Dr Sizer hopes that this may now draw a line under the matter.”