An arm of London’s Al-Muntada mosque is staging a conference in the capital in July. It provides another clear illustration that Al-Muntada is in the business of promoting some of the world’s worst Islamist extremists. Repeatedly, relentlessly, and with no compunctions whatsoever.

Take a look at one of the speakers, Saudi scholar Abd Al-Aziz Fawzan Al-Fawzan. Christians? Let’s “positively hate” them!

What about women? Don’t let them drive cars! This is how you destroy society, like the benighted West!

And certainly don’t let them lead prayers. Not least because this would help the enemies of Islam – the Jews and the Christians!

“Even if the imam makes a mistake during prayers, the Prophet banned women from saying ‘subhan allah’ [‘God forbid’] like the men say in such a case… Women must clap their hands [instead]. Why? Because the voice of women is tender by nature, and arouses [urges], and it is improper for men to engage in thoughts about women during prayer…’

“Thus, how can a woman be permitted to become a preacher? Undoubtedly, this is unacceptable, and must be condemned…

“I know of no clerics who permit men to be led in prayer by a woman, not even in the five [required daily] prayers – and all the more so in a sermon… The controversy amongst the clerics concerns women leading women in prayer… [and whether] this is lawful or merely permissible… [Even in this case,] the clerics have determined that a female imam must stand amongst the women, not in front of them, so as not to be like the men [where the imam stands in front of them]. This being the case, how is it conceivable that she deliver a sermon? This is a strange thing… that emanates from lack of faith, from religious weakness, and from laxity in religious knowledge, and also from behaving in accordance with the will of the enemies of the [Muslim] nation – the Jews and the Christians…”

And homosexuality? An abomination!

Some people want to Westernize our society in any possible way, but they know that if they advocate fornication, forbidden sexual relations, and homosexuality, the people would stone them. So what do they do? They come up with these deviant fatwas, which lay the ground for these crimes and abominations.

What good Muslims should do is to support jihad.

On December 21, 2004, Saudi professor Abd Al-Aziz Al-Fawzan explained: “Jihad is an individual duty applying to the Iraqi people. They need to wage this jihad against this enemy until it leaves their country.”

Though not 9/11, mind you. Anyway, that was the work of the Americans themselves. And happily America is collapsing.

A few years ago, the Socialist Communist system ended in a devastating collapse, and it was followed by the Soviet republics, one after another. Russia gave up its competition against American hegemony, and the United States became the unipolar leader ruling the world. Now, Allah be praised, America is collapsing, according to the same scenario of the Russian collapse.
…
They committed crimes that only God knows of. Either they were accomplices in 9/11, or else they carried it out, even though they have deceived the world about this. They carried out many terror operations around the world, and the president of Yemen revealed two days ago that a terror cell that was captured was using Islamic slogans, but in fact belonged to Israeli intelligence. These criminals want to take control over the world, by spreading fear, death, and destruction, and at the same time, they give the impression that they are the victims.

The host of this conference is the posh venue Grand Connaught Rooms. It seems to be developing a lovely line of business in hosting Islamist extremists. Its managers have been informed about the nature of the event. They don’t care and plan to proceed.

Perhaps Labour MP Andy Slaughter could send them a note of thanks. He hosted Al-Muntada at an event in Parliament just two months ago. 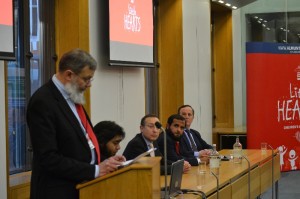