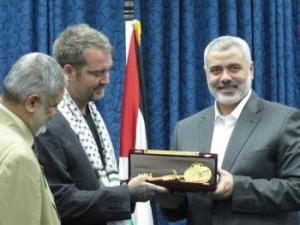 Palestine Place is listed as an event on the official PSC website. Many Palestine Place and PSC activists support Hamas. The PSC teams up with people such as Mohamed Sawalha, a fugitive Hamas commander based in the UK. The PSC also attempted to bring to Parliament, the convicted Hamas-fundraiser and Blood Libel Sheikh Raed Salah.

Palestine Place does not see antisemitism as a relevant factor, as to why Hamas or Islamic Jihad fire rockets at Israel. Yet this is what Hamas says of the Holocaust:

Branding the Nazi genocide of the Jews “a lie invented by the Zionists,” the Islamist movement which runs the Gaza Strip wrote in an open letter to a senior U.N. official that he should withdraw plans for a new history book in U.N. schools.

Hamas denies the Holocaust, and honours the Atzmonite Ken O’Keefe whom Palestine Place ejected, with the “key to Gaza”.

Islamic Jihad also has an antisemitic charter, calling for “Jihad against the Jewish existence in Palestine”, and the organisation also routinely murders Jews.

At Palestine Place, activists listened to a Q & A session with Islamic Jihad leader Khader Adnan, who encourages suicide bombers to murder Jews.

Why would Palestine Place and the PSC give Hamas and Islamic Jihad a free pass on antisemitism, but criticise Gilad Atzmon and Ken O’Keefe for antisemitism?

The difference is that Hamas and Islamic Jihad are engaged in attempting to murder currently-living Jews, whereas Atzmon and O’Keefe seek to undermine or question the history of already-dead Jews.

Hamas also question this history, but given that they are engaged in the murder of Jews, this appears to absolve them of their Atzmonite shortcomings of Holocaust denial and revisionism.

For the PSC and Palestine Place, Atzmon doubting the history of dead Jews is bad, and Islamic Jihad and Hamas’ quest to murder Jews is good.

Might I suggest there is little use in anathematising people who doubt the historical genocide of now-dead Jews, if you cannot draw out the obvious lesson of this event, not to seek a genocide of living Jews today.