Update: It is now confirmed on the website of Al-Bayaan that Haitham al-Haddad will not be attending this conference.

Following on from the recent Student Rights article highlighting the dangers of students organisingor promoting off-campus events featuring extremist speakers, this Sunday will see a conferencecalled ‘Flee to Allah’ take place which students at several universities have been encouraged to attend.

Promoted to their members on Facebook by the Islamic Societies at Roehampton University andLondon South Bank University (LSBU), students have been told to “check out this beneficial conference” and provided with details on how to buy tickets.

The conference is organised by Al-Bayaan, an organisation which aims to “teach the Ummah the keys to understanding the beautiful deen of Islaam…and to build an atmosphere of correct Islamic moral and etiquettes”.

Interestingly, on the Facebook page advertising the event, the Al-Bayaan profile states that “We will also be at LMC [London Muslim Centre] for LSBU Annual Dinner”, highlighting the connection between organisations and university societies that exist off-campus. 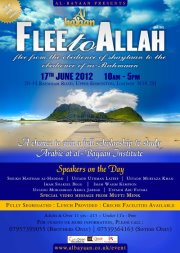 Top of the bill at the conference is Haitham al-Haddad, a man who has been criticised for hissupport for Hamas, anti-Semitism and homophobia. Al-Haddad is frequently invited onto campuses, and has also been barred from appearing at several, including the London School of Economics and London Metropolitan University.

He will be joined by Murtaza Khan, who has described homosexuality as an “abominable action which goes against humanity” and stated that the correct punishment for such acts is death.

He was also filmed in 2007 asking “for how long do we have to see our mothers, sisters and daughters having to uncover themselves before these filthy non-Muslim doctors?”

Also present will be Uthman Lateef, highlighted by the recent Student Rights report ‘Challenging Extremists’ as the Director of the Hittin Institute, anorganisation which has released a number of reports, including one calling for “the return of the Islamic system” for Palestine.

Lateef has also said that “we don’t accept homosexuality…we hate it because Allah hates it” and in 2009 told an audience at the East London Mosque that “if we are teaching the way of life of the disbelievers, of the kuffar, Allah will bring humiliation on us”.

Another speaker on the bill, Shakeel Begg, was found in 2006 to have told students at Kingston University “You want to make jihad? Very good […] Take some money and go to Palestine and fight, fight the terrorists, fight the Zionists”.

Whilst the promotion of these speakers to students is deeply concerning, a further development highlights the way in which extremism only breeds further extremism.

They are also running a Facebook event page called ‘Oppose the Flee to Allah Conference’, which says “At this point it is`nt [sic] a demo – if the venue does`nt [sic] cancel…..WE`RE COMING”. They also claim that Haitham Al-Haddad has withdrawn from the event, though this is yet to be confirmed by the organisers.

The damage that campaigns like this do to community cohesion is clear to see, and by promoting these events to their members Islamic Societies are equally to blame. Here at Student Rights we hope that many students will not attend this event and protect themselves from extremism on both sides of the political spectrum.