The Electronic Intifada is a favourite news site for anti-Zionists who consider themselves edgy or progressive. It is not pro-peace.

Nader Elkhuzundar is an anti-Zionist who thinks that the “best part about dying a martyr is that you get 72 hoor in jannah <3“. Elkhuzundar publishes material on his blog threatening “bloodbaths” against Israel, and apparently urging Palestinians to “kill a zionist“.

Hence this post on Harry’s Place when he was (surprise surprise) published in The Guardian. 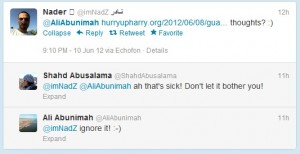 Electronic Intifada also publishes Atzmon-admirer (and Borat-hater) Stephen Salaita, and also “the racist Ben White, who wants to boycott Jews based on the fact he dislikes Howard Jacobson’s face, and Sonja Karkar, who thinks Jews will bring about the next Holocaust upon themselves”.

Now its editor laughing alongside a guy wanting bloodbaths against Israel.

Remember that if and when Abunimah ever talks about peace.