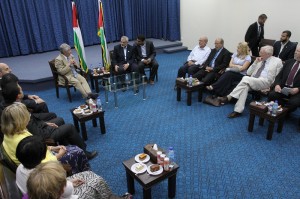 “At the above conference in Qatar , Doha  I had the pleasure of meeting John. V. Whitbeck a former legal adviser to Yasser Arafat and the Palestinian negotiating team . […] John V Whitbeck advises Abbas in  his letter […]”

Whitbeck is a 9/11 truther who thinks 9/11 was an “inside job”. He thinks Israel’s supporters are “wealthy and powerful”, and the nations are “subservient” to Israel, in a “slavish” way.

He has also written:

This man is praised unconditionally by Labour’s Pauline McNeil.

More evidence that Labour is creating more antisemitism rather than combatting it.

One Day in Gaza: We are all Israelis