By Raziq (A former member of Hizb ut-Tahrir)

In light of the recent media revelations about Baroness Warsi’s links to Abid Hussain, and his subsequent denial of any involvement with  Hizb ut-Tahrir, this short piece is aimed at clarifying his previous links to the group. 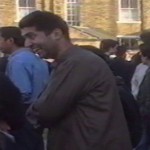 I knew Abid in the 90’s when he was involved with Hizb ut-Tahrir (HT).  Back then he used to attend all of the group’s rallies & events, and was well known in HT circles as being a committed activist.  In the mid-90’s, he also resided at the London School of Shariah in Tottenham for a while.  At the time, the School of Shariah was the hub of all HT activity in the UK. This was when HT was under the leadership of Omar Bakri Mohammad.  His brother Mohammad Nawaz Khan was and still is a senior member of HT.  He was also the former spokesman of HT in Pakistan (where the group is now banned).   Abid is also related to Baroness Warsi’s current husband “Iftikhar Azam”.

Abid has claimed that he was never an official member of HT but ideologically that makes no difference.  HT is not a group that seeks members on mass; it considers itself to be an intellectual party whose goal is to spread the Islamist ideology.  Therefore, one can be an activist with the organisation, study in its inner circles and be more active than the official members and yet not be a fully fledged member.  HT membership entails certain responsibilities that not all activists can commit to (i.e. manning HT stalls on particular days of the week and donating a percentage of their salary to the group).  By stating he wasn’t an official member does not mean that he was any less involved than the official members were.  The whole “not being an official member” thing is actually a bit of a red herring.

From what I remember, Abid was a comical figure who was always attempting to crack jokes.  He used to refer to those Muslims who were not following HT ideas as “Jakes” and the ones who were as “Strappers”.  I never really did understand his bizarre sense of humour!

One thing I am absolutely certain about is that, at the time, he firmly believed in HT’s core ideas. It is important to note that there are many HT members and activists who do not believe in every single idea and opinion of the group.  Like many others, Abid may have had some disagreements with HT, however, that does not mean he didn’t believe in their overall aims (e.g. the establishment of an expansionist Islamist Super State/Caliphate).  For a more detailed explanation of how HT membership works, please read this excellent post.

I’m not sure how involved Abid is with HT these days.  However, denying that he was ever involved or that he only attended a few of their events is simply not true.   It would be better if he did the honourable thing and admitted his previous close links to the group.  What is more worrying for me is that he now works as a Third Sector and External Funding Manager for Tower Hamlets Local Authority.   I would be very interested in knowing what organisations he has been funding in this capacity. Do any of them happen to be linked to IFE, ELM or MAB by any chance?