Back in 2010, anti-Israel campaigners in the Seattle area tried to purchase billboards on the sides of public buses with the message: “Israeli war crimes: Your tax dollars at work.” Their effort ultimately was blocked by the managers of the bus system.

By contrast, in London: 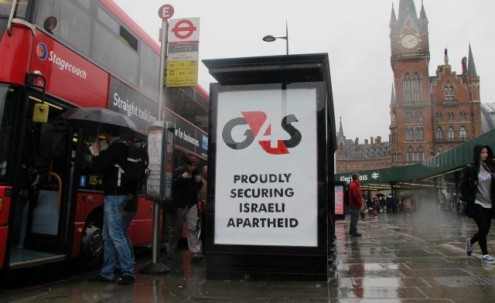 Does anyone want to look into this? Does London Transport have a policy on this? Is it possible that the sign was placed without authorization?

The sign was indeed unauthorised – it was a piece of paper made using paint and was slipped in the top of the case. This photo doesn’t show it because it’s at some distance. Clear Channel, who own the space, were informed and the sign removed very quickly.