Some thoughts on the big political news here in the US: the defeat Tuesday of an effort to recall Wisconsin’s Republican governor Scott Walker and replace him with Milwaukee’s Democratic mayor Tom Barrett.

–It’s a definite advantage when you and your supporters can outspend your opponent and his supporters by a margin of 7 to 1. Perhaps Walker would have won even if spending had been even. But it would have been interesting to find out.

–Clearly the election was a serious defeat for Democrats in Wisconsin and, to an extent, nationwide. But before Mitt Romney and the Republicans start measuring new drapes for the White House, they may want to consider this:

[President] Obama had a 51-44 percent edge over Romney in exit polling, and more Wisconsin voters said that the president would do a better job improving the economy and helping middle-class voters than his GOP rival would. A sizable 1 in 5, however, said they trust neither party’s candidate on the economy, the main issue in the presidential campaign.

–The effort to oust Walker began when he pushed through a law to restrict the collective bargaining rights of public employees in the state. Although that law was widely unpopular, it’s now obvious that the recall effort was a bridge too far. Even some voters who didn’t like Walker or his policies were uncomfortable with the idea of recalling a sitting governor short of official misconduct.

–Consider, by contrast, what happened last November in Ohio. Instead of trying to recall Republican governor John Kaisich, his opponents organized a referendum on the law he backed to restrict bargaining rights for public workers. That law was defeated overwhelmingly.

–That said, Republicans have had some success in their attacks on unionized public employees, and unions in general. While carefully excluding from their wrath popular government workers like police and firefighters, they have have done a good job of portraying these employees as over-privileged, over-protected people feeding at the public trough while other workers struggle and make sacrifices. 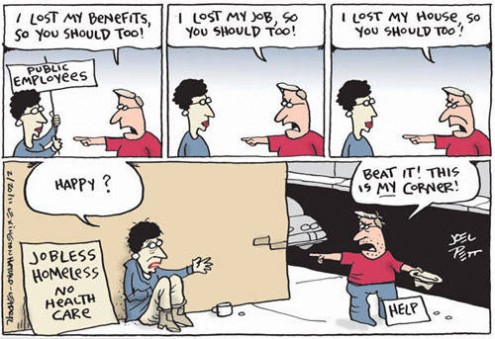 Update: It appears Democrats have reclaimed control of the Wisconsin State Senate, at least until the November elections.