What should mainstream politicians make of a man who has this to say about the vicious antisemitic hoax The Protocols of the Elders of Zion:

The remarks are made during a long and cosy internet radio chat with the antisemitic lunatic Daryl Bradford Smith, who calls the man “a friend of mine”.

In another interview, the same man had this to say to Daryl Bradford Smith about the September 11 atrocities:

The events have been so beyond the capability of quote unquote Al Qaeda, this myth which we have created. There are terrorist acts, but the idea that there is this super duper power which is there which is beyond the ability of the United States of America and the NATO and all sorts of other things can just never be right and can never be swallowed.

If we look at the events of the actual downing of the buildings at the World Trade Centre, this is beyond the ability of some individuals. It doesn’t matter how much they are trained. You know, the idea that they’ve done this because they had hand knives in their hands? Come on, tell me another one.

The man was also described by George Galloway as “my right hand” in the early days of Viva Palestina, the band of fanatics and haters that runs convoys to Gaza to provide material and political support to the terrorists of Hamas.

He even found time in his busy extremist schedule to help out Abu Hamza’s legal team.

Oh, and he saw a silver lining in the beheading of Nick Berg in Iraq, unlike those “extreme” people who thought it was simply abhorrent.

I don’t know whether the video is genuine or not. It looked to me as if it is genuine. In terms of its implications, there are at least two extreme reactions to it. The first reaction is that it is abhorrent and unacceptable behavior. And the other extreme is that it is a punishment directed at the Americans as a reaction to their crimes.

The first extreme point of view may result in hardening attitudes in the West and making people angry and claiming that is what they are fighting, i.e. terrorism. The other attitude would be based on the fact that such an action will make many people who would have otherwise worked for the occupying forces hesitant and reluctant to do so, and would serve as a warning for others that those involved with the occupying forces will be dealt with severely.

Between these two extremes, there are certainly a variety of other views. I personally think that while I disapprove of the beheading of this man, I think it will create fear in the hearts of those who would have otherwise gone to Iraq. I also think this will certainly not make the Iraqi situation any worse, as the situation is so bad at the moment that the Americans and the British and the rest cannot make it any worse.

Such a man should be shunned and opposed by mainstream politicians, right?

Actually, in the case of Sabah al-Mukhtar, for it is he, the answer from Labour in the shapes of Lord Alf Dubs and Jeremy Corbyn is “no”.

Instead they joined up with him last month at a conference he chaired. It was organised by Middle East Monitor (MEMO), the hate publishing operation of Daud Abdullah and Ibrahim Hewitt, the chairman of Interpal, Britain’s dedicated Hamas service bureau.

This week a sobering and highly informative closed door seminar was held on the plight of Palestinian Prisoners in the elegant surroundings of London’s Westminster Central Hall, a stone’s throw away from the Houses of Parliament and the 11th century Westminster Abbey, the all affirmation of stability and continuity – in starkest contrast to testimony at the proceedings of the meeting.

The seminar, hosted by Middle East Monitor, had been planned and organized at the height of the Palestinian prisoners’ hunger strike.

Ibrahim Hewitt (right) with his master 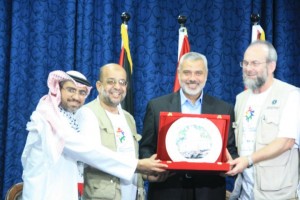 At the Westminster conference, al-Mukhtar took the opportunity to hail violence:

Sabah al Mukhtar, President of the Arab Lawyers Association, who chaired the gathering, opened by reminding that, “A basic right of a people under occupation is to resist.”

Most defendants were: “just throwing stones.”

Heaven forfend Dubs should ever be attacked by people throwing stones, but if he is this line should haunt him.

If there is any pale, Sabah al-Mukhtar and MEMO should be beyond it.

Labour should demand that its people stop helping, mainstreaming and promoting extremists and antisemites.

I am quite confident that it won’t.

Sabah al-Mukhtar (left) on a Viva Palestina escapade with Galloway. On the right is Ahmad Al-Kurd of Hamas. 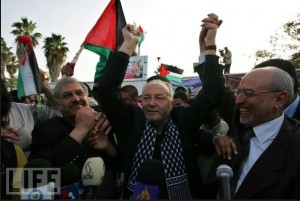