Having travelled through Syria – completely unnecessarily – as guests of the Assad regime and having lost the support of a number of their supporters, the Viva Palestina caravan has ground to a permanent halt. 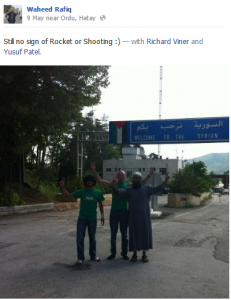 After spending two weeks in the Jordanian port city of Aqaba The Times reports:

This week they decided to cut their losses and abandon their mission.

According to the Jordanian newspaper al-Dustour, Kevin Ovenden, the convoy’s leader, said that the group appeared to have secured permission from the Egyptian authorities, but that this was rescinded at the last minute for no apparent reason.

But others blamed poor leadership and organisation.

Timur Khan, one of those who abandoned the convoy in Turkey, told The Times: “I left in Istanbul after a series of increasingly bizarre and dangerous decisions, including a vociferous insistence on going into Syria.

Here’s Kia Ora Gaza’s explanation of why they couldn’t continue to be associated with Viva Palestina:

“Born under a bad sign.” This title of a popular Cream song(2) could well describe the ill-starred fate of the Gaza aid convoy farewelled from Bradford, England five weeks ago by Viva Palestina founder George Galloway.

Not all the fingers of two hands were needed to count the number of convoy vehicles gathered in Bradford on that cold, rainy day. But Galloway prophesied “huge” en route additions to the convoy. “It will be joined, particularly from Turkey, by huge numbers of vehicles,” he told departing convoyers and their supporters. “By the time it arrives in Aqaba, it will be a mighty convoy.”(3)

None of this came to pass, however. The convoy stayed small, and the Jordanian town of Aqaba was the setting for the first big failure in Viva Palestina’s history. So what crashed the convoy?

Read it all. Apart from the Syrian issue, it contains some startling gems:

According to convoyer Timur Khan, “a succession of grossly incompetent decisions” were made by convoy management from early on. One such decision was “a reckless 16 hour journey through Romanian bandit country,” remembers Khan. “On thin mountain passes two vehicles were attacked, mine included”. He believes that “there was no reason to go that way”.

Convoyers were told that Turkish humanitarian network IHH “would be hosting us” in Istanbul, Khan recalls. “They didn’t. And we do not know why.”Instead the convoyers, most of them Muslims, were led by their management to an Istanbul hotel “in the red light area and it had no car parking facilities,” reports Khan. “I filmed almost surreal footage of pious Muslims with big beards and jubas being harassed and abused by pimps and prostitutes.”

Next day saw a tense meeting between convoyers and mission director Kevin Ovenden. “He blamed the convoyers for ill-discipline and inflamed pretty much everyone there,” according to Khan. “The meeting descended into anarchy.”

Viva Palestina activists are astounded and shocked to find that some of their comrades have a problem with their complicity with murderous Syrian Baathism. In fact, everything you hear about Assad’s brutality is just lies, dontchaknow! 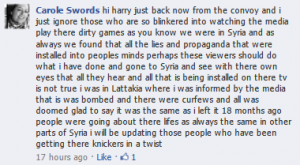 And here’s Richard Viner – a self employed entertainer formerly of Douai Abbey – who has this to say:

“Those of you who want to belittle the attempt of V.P.A.6 to send aid and break the illegal seige of Gaza because we have travelled through certain countries, are more interested in political agenders than helping oppressed people.As far as I am concerned any country that lets us pass through its territory to help and support the people of Gaza has my respect.If you dont agree UNFRIEND ME.” 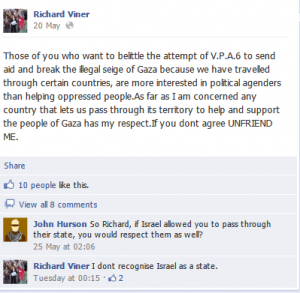 Here’s another convoy participant, Waheed Rafiq. He knows who is carrying out attack in Syria.

“With the grace of Allah Mercy we have all arrived safely in Jordan , our thoughts and prays are with those families in Syria who are suffering from the bomb blast .. This bomb blast in Syria kill 45 people near the main city Airport “it’s said the bomb was made not by a individual person but by a group who has access to white phosphorus ! We all know who uses that!” 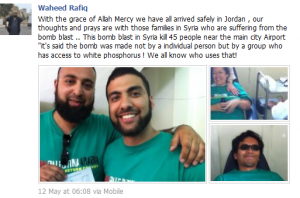 Fra Hughes, another participant, “likes” WhatReallyHappened.com’s claim that people in Syria are being killed by the USA, who are running a “false flag operation” 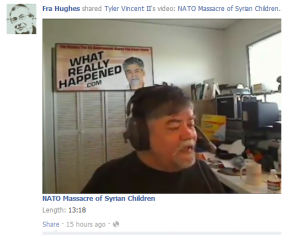 Waheed Rafiq was delighted to be met and hosted by Baathist officials: 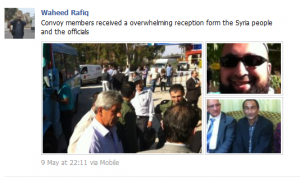 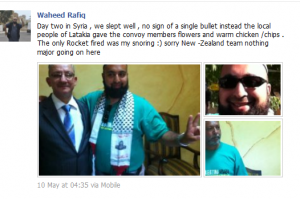 Nice work Galloway! I’m sure Assad’s cheque is in the post. 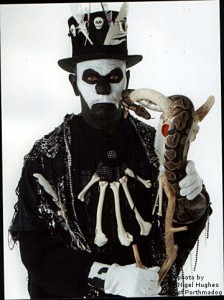 P.P.S. At the end of this video you will see the mayor of Bradford hailing Viva Palestina at the convoy send-off. She’s Labour, of course.

Kevin Ovenden in better days, being decorated in Gaza in 2010 for Viva Palestina services to Hamas by Ismail Haniyeh and Mahmoud Al-Zahar 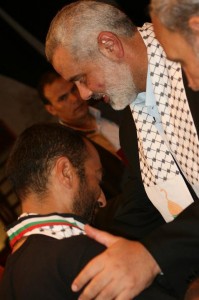