Last night saw the culmination of weeks of national and local incitement against the African refugee/asylum seeker population in Israel. Hundreds of local residents and settlers from the West Bank settlements rampaged through South Tel Aviv neighborhoods attacking Africans and smashing African businesses.

Veronique Bibi, from Congo, was thrown to the ground and beaten after leaving her house to try and talk to demonstrators. Bibi, a well known activist back home in Congo, who had held talks, before she had to flee Congo, with Nelson Mandela said she ‘felt lucky to have escaped with her life’ after being set upon by a crowd of dozens. 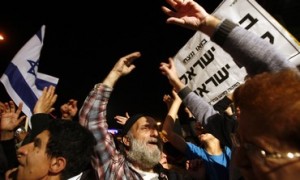 Earlier in the evening at the start of the demonstration Likud MK Miri Regev said “the Sudanese were a cancer in our body.” And MK Danny Danon, head of the ‘Deportation Now’ movement called for the immediate removal of all Africans from Israel. This is the latest in a long line of incitement by our elected officials, including Interior Minister Eli Yishai, MK Michael Ben Ari and extreme settler leaders including Baruch Marzel. Human Rights groups have begun working on whether there is a case for incitement against them.

Approximately 60 000 asylum seekers have entered Israel since 2005. 80% of the asylum seekers are from Eritrea and 10-5% from across Sudan. Since 2005 less than 20 have received refugee status. Huge pressure has been placed on poor neighbourhoods in South Tel Aviv and peripheral cities in the South of the country, where the communities themselves are religious and conservative and very wary of a large foreign community suddenly living alongside them. Without the legal right to work, or access to any government services, the asylum seekers rely on the support of a number of small NGOs and a small UNHCR office in Tel Aviv.

Despite the circumstances they have gone through before their arrival, and the harsh conditions they face here in Israel, crime rates have consistently been below the national average in all years that statistics have been released (2005-2011). Hints by the current police chief that those numbers have increased since the start of the year were followed by his suggestion that asylum seekers must be given work permits, and also met by scepticism from refugee rights activists who claimed the numbers are being manipulated to help the Tel Aviv police get a larger allocation of the funds released by the finance ministry to deal with ‘infiltrators’.

Politicians in Israel are doing nothing to lower the tensions in the neighbourhoods worst affected, in fact they are regularly coming here to incite the local activists. Without clear and unequivocal statements from our elected officials against these senseless acts of violence the situation will continue to get worse. We now have to post overnight guards at our shelters for single mothers and children and are awaiting with trepidation the inevitable next round of escalation that could even lead to murder.

The writer is a program manager for the African Refugee Development Center. He is an oleh from London and a graduate of Noam UK.