Regular readers of this blog will probably be aware that for the last decade or so, Israel has been experiencing an immigration wave unlike any before. What began as a trickle of asylum seekers, fleeing the atrocities in Darfur, has turned in recent years into a flood of mostly work-immigrants crossing the border from Sinai, each paying thousands of dollars to Egyptian smugglers in search of better opportunities. An estimated 60-80 thousands have already crossed the border, with 500-1000 arriving every week. For a nation of about 7 million people – that’s a lot.

As a result, increasingly large numbers of immigrants Sudan, Eritrea, Ethiopia, and other African countries have been amassing in the already impoverished and neglected neighborhoods of southern Tel-Aviv. Local residents have seen their neighborhoods transformed in front their eyes, crime rates go up, and in some cases their jobs lost in favor of cheaper foreign labor.

This is a complex national, legal, and human issue involving genuine refugees fleeing persecution in their countries (and protected by international law), work immigrants seeking better opportunities, and local residents who bear the burden of years of governmental neglect and lack of direction. Although authorities have begun to take some measures, much remains to be done.

Alarmingly, however, a number of right-wing politicians have begun exploiting this issue, fanning already heated tensions and raising the ugly head of blatant racism.

Meet MK Dani Dannon, of the ruling Likud party and self-appointed leader of the anti-immigration movement: earlier this week he proudly announced he was forming a new movement called “Deportation Now!”, aimed at combating illegal immigration. I don’t know what is more disheartening: the fact that a member of parliament would think of such a title for his movement, or the fact that he would be so proud of it. 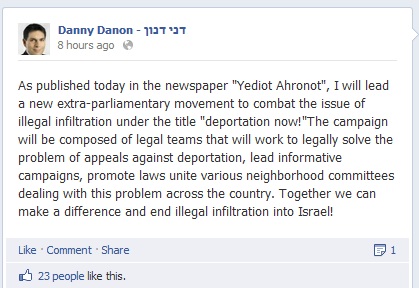 Not one to confine himself merely to words, he took part in a demonstration last night against illegal immigration, along with a number of other MK’s from Likud and other right-wing parties.
This is what he updated on his Facebook page:

“At the demo in Tel-Aviv against the infiltrators. It’s time to make it clear to all the do-gooders – Israel is at war! An enemy state of infiltrators has been created inside of Israel, and its capital, southern Tel-Aviv. An end must be put to it – deport all of the infiltrators before it’s too late!” 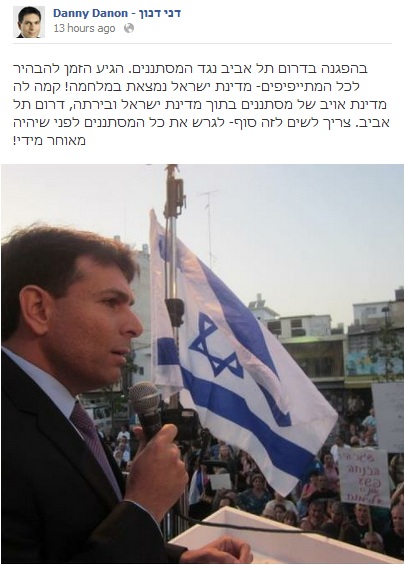 MK Miri Regev, another Likud member to take part in the demonstration, was just as eloquent, stating:

Some of their followers have been even more forthcoming and direct about what they mean. Below is a picture of one of the demonstration participants. The writing on her shirt reads “Death to the Sudanese”. 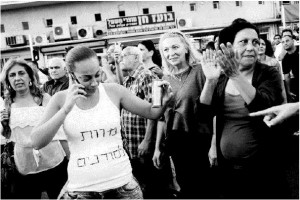 There should be no mincing about it – the language and rhetoric used by Danon and his fellow “anti-immigration” activists is one of outright racism of the worst kind. It is identical to language used elsewhere by the most extreme and reactionary elements in society. Had the same words been directed at Jews, these very same politicians would be the first to cry out “anti-Semitism!”

Sadly, however, not only don’t they see the similarities, but seem to be completely unashamed at keeping at it.

Danon and his fellows all claim they are against violence and for working within the limits of the law, but following the demonstration a number of African workers were assaulted in the street and several demonstrators were arrested for rioting.

Isn’t it funny how words have a way of turning themselves into actions?