Potkin Azarmehr and Emanuele Ottolenghi raise doubts about Iranian claims that a “Mossad spy” was executed for the murder of an Iranian nuclear scientist.

Iranian TV showed what it claimed was an Israeli passport issued to the alleged spy, Majid Jamali Fashi. 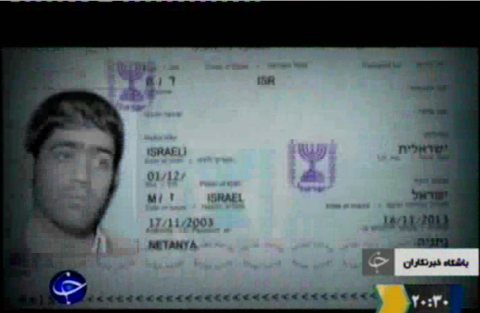 I will leave it to others to decide whether Fashi’s execution was a fake. The passport certainly looks like a fake. This has less to do with the fact that the name and ID number of the passport holder have been erased and more with obvious flaws:

First of all, any passport issued since the mid-1990s by any country includes, at the bottom of its main page, a line with left-pointed arrows, much like in this picture. In an authentic passport, the line begins with the letter P followed by the three letter code of the country issuing the document (ISR for Israel), followed by the passport holder’s full name. In the snapshot, the line contains only arrows and no name – N.B. the name is not erased or blurred, it is simply not there.

Beyond this first surprising fault, the picture for Fashi is not suitable for passports – he is gazing away from the camera, whereas a passport head shot requires that the passport holder stare into the camera.

But there is something more – a small detail that Iranian state falsifiers–sloppy as ever–overlooked.

Fashi’s picture is very recent – yet the passport was issued, according to the snapshot, on 17 November 2003. Fashi’s biographical details tell us that he was 24 when he was hanged. If that is the case, he would have been 15-years-old – a teenager, with a much more boyish face with less facial hair than the picture shows.

For obvious reasons then, the year of birth of the passport holder is concealed as well.

Fashi might have been executed after all. But the attempt to turn him into a Mossad agent and gun-for-hire rests clearly on an orchestrated attempt by the regime to scapegoat someone who is innocent.