Leila Khaled was a plane hijacker working with the PFLP.

On May 24, we will launch a biography of Leila Khaled, the young woman who hijacked a passenger jet in 1969.

Leila Khaled: Icon of Palestinian Liberation bySarah Irving is a compelling account of Khaled’s turbulent life. At the book launch, Sarah will explore Leila Khaled’s involvement with a radical element of the PLO, the rise of Hamas, the role of women in a largely male movement and Khaled’s activism today.

On the event advert, Blackwell’s offers a handy ideological graphic for those who might be a bit queasy about hijacking and blowing up civilian airliners in order to liberate one’s fellow terrorists: 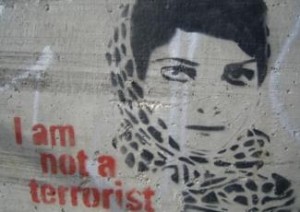 The book is written by Guardian writer and ISM activist Sarah Irving. The event is hosted by Manchester PSC activist Linda Clair.

It is an old adage that “one man’s terrorist is another man’s freedom fighter”. And Marxism 2012 is very proud to play host to some incredible freedom fighters.

Leila Khaled is a member of the Popular Front for the Liberation of Palestine and has dedicated her life to Palestinian freedom. Most famously she hijacked two planes in the ‘60s and ‘70s. Banned from the UK, Leila joins us via Skype Sun, 3.45pm.

This is the event which will be hosted at UCL in its Cruciform Lecture Theatre:

Sounds like a perfectly peace-loving, liberal girl from whom the Left and pacifists can enjoy and learn.