Here’s George Galloway in action, as reported by the Assad regime’s propaganda service:

British MP George Galloway reiterated his absolute rejection of any foreign intervention in Syria’s internal affairs, showing commitment to the Arab and humanitarian issues, particularly the Palestinian cause where the way to Palestine passes through Syria.

At a celebration held in honor of Galloway who won a seat at the British House of Commons, the British MP hailed facilitations offered by the Syrian authorities to let the Gaza-bound humanitarian convoys, to break the unfair siege imposed by Israel on the Strip, pass through the Syrian lands.

He was astonished at the campaign of criticisms against the convoy which was considered as only aiming at arriving in Syria, saying “I don’t understand the purpose of those criticisms… we travel through all countries that lead to Palestine.”

But what is George Galloway doing in at a party in the Middle East, rather than in his constituency of Bradford? Why, he’s leading another expedition by the Hamas support operation, Viva Palestina:

The humanitarian aid convoy “The Right to Return” heading to Gaza entered the Syrian territories through Kasab crossing point on Wednesday.

The convoy is organized by a group of Europeans who stand in solidarity with the Palestinian people and Syria and headed by the British MP George Galloway.

Receiving the convoy, Lattakia Governor Abdel Qader Mohammad al-Sheikh and Secretary of al-Baath Party Branch in Lattakia, Mohammad Shreitah, expressed Syria’s gratitude to the convoy members’ stances in support of the Palestinian Cause which is the Arabs’ central cause.

Spokesman of the convoy members thanked the Syrian government and people for facilitating their mission in conveying aid to the Palestinians in Gaza and continuing efforts to lift the siege imposed on them.

That’s our George. Although I understand he hasn’t actually entered Syria himself, yet.

But here’s Kevin Ovenden – Muttley to Galloway’s Dick Dastardly – cosying up to his pal, the Mayor of Latakia 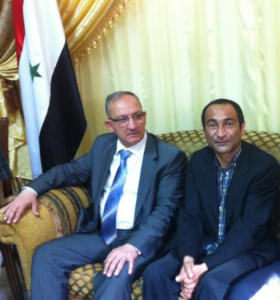 And here’s a nice video showing Ovenden in Syria:

As we previously reported, former Viva Palestina activists in New Zealand are most unhappy about the completely diversion of Viva Palestina into Syria. They have concluded, correctly, that this stunt has been engineered in order to provide the Assad regime with a little helpful propaganda.

They are now pretty furious with Viva Palestina:

On 9 May, the Viva Palestina Arabia convoy carrying aid to Gaza crossed the Turkish border into Syria. According to emails leaked to a Syrian opposition paper,(1) convoy organiser Amer Nazir had promised that the Assad regime “will provide us complete protection and security” during their passage across strife-torn Syria.(2)

Unless Viva Palestina Arabia charters a ship from Latakia to Egypt, the convoy must next drive through a region dominated by Homs. This city has been most cruelly battered by the heavy weapons of regime forces, with 5,775 people slaughtered. Before reaching the relative safety of Jordan, hundreds of kilometres lie ahead of the convoyers, with their final leg skirting close to Daraa, where 1,490 people have died in Syria’s turmoil.(4)

John Hurson, who travelled from London to Gaza on Viva Palestina’s 2010 convoy, rejects the notion that the current convoy is not taking sides in the Syrian conflict: “By going into Syria, they ARE taking sides.”(13)

Timur Khan, who had left Bradford with the current Gaza mission, announced with “much regret” in Istanbul that “I will not be continuing my journey with viva palestina through Syria, due to irreconcilable differences with the convoy’s leadership.”(14)

And it’s old news by now that Viva Palestina Malaysia and Kia Ora Gaza withdrew from the convoy shortly before departure due to the Syria route.

The unprecedented wave of criticism coming from friends of Palestine is causing strains among the convoyers. Fra Hughes, a Gaza activist from Ireland, recently wrote: “Would those who disagree with the proposed convoy route please stop attacking the convoy. I understand and share some of your concerns however we would appreciate your support at this difficult time for all of us here.”(15)

(1) The leaked emails are contained in the comments following the article “George Galloway’s Convoy through Syria”, The Syrian Sun, 6 May 2012.

(2) This email from Amer Nazir was dated 17 March 2012. It was addressed to a prospective convoyer who, in the end, decided not to go.

Here are the Kiwi Viva Palestina lot, with Galloway, in happier times: 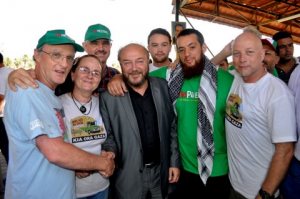 No idea why they’re surprised. Anybody who knows anything about Galloway, knows that this is how he behaves.