First Israel is the featured country at the LGBT Equality Forum in Philadelphia, at which Israeli ambassador Michael Oren speaks. Then President Obama endorses same-sex marriage. And now the overwhelmingly Shia Muslim nation of Azerbaijan prepares to host the famously gayish Eurovision contest. (It seems rumors that the contest will be followed by a gay pride parade in the capital city of Baku are just that.)

The notorious Friday Prayer leader of Tabriz, Mojtahed Shabastari, also the Supreme Leader’s representative in the E. Azerbijan province, a particularly monstrous cleric and one of the founders of the Islamic Republic has been tearing himself apart worrying about the Shiite population of Baku having to endure the shame of hosting the Eurovision concert followed by a gay parade.
….
Not only Iranian people are deprived from singing and dancing, Iran’s clerics are now also telling Iran’s neighbours that they can’t have fun either.

Here are some photos from a demonstration organized by Shabastari.

This sign says “Eurovision is not a music festival but a festival to promote decadence and homosexuality”: 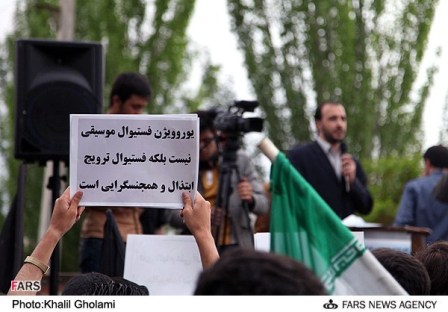 This sign says “Mr. Aliyev [president of Azerbijan] instead of holding a gay parade, think about liberating Karabakh”: 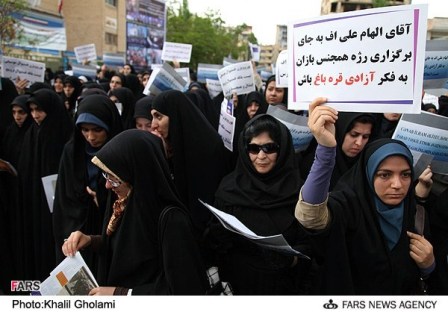 Oh, and while they were at it: 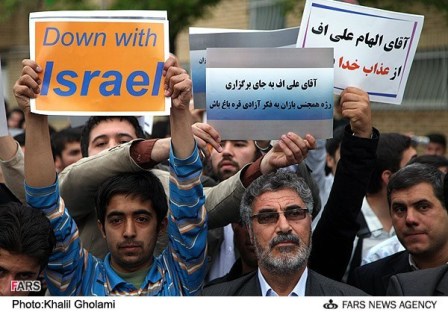 …who must be to blame for it somehow.