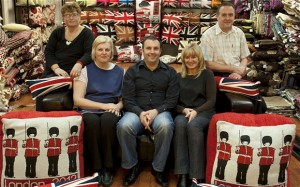 I had mixed feelings when watching the first episode of The Town Taking On China last night on BBC2, featuring erstwhile Conservative mayoral candidate for Liverpool, Tony Caldeira in his efforts to return his upholstery factory to Kirkby in Merseyside from its current location in Hangzhou, China.

His stated aim is laudable enough. To collaborate with Government agencies and return any form of employment, manufacturing or otherwise to an economically depressed area. Even though the impetus was an increasingly organized Chinese labour force which is pushing more higher pay and he will be paying employees in Kirkby only the minimum wage, if this has the side-effect of bringing economic development to Britain, it would be churlish to object too strongly.

An immediate objection I felt, however, was that Caldeira was not relocating to Kirkby. He was returning after closing a previous factory there eight years ago, and moving to China. In 2007, he appeared in a Channel4 documentary extolling the economic sense in relocating to China with her unfettered employment laws and labour force willing to work for under £1 an hour.

Time has moved-on, and in his latest television appearance he bemoans Chinese workers asking for what is a whopping £1.50 per hour:

“She’s actually wanting a 50% pay rise in essence,” said Mr Caldeira, “and basically sticking a gun to my head and saying: ‘Well if you don’t pay me 50% more, then I’m off somewhere else.’

There is no denying that Caldeira has worked his way-up from the bottom, having been brought-up in a single parent household on a Merseyside council estate before starting with a single market stall in 1991. Yet, his prediction for how he would confront Kirkby workers demanding similar suggests this is not so much a neo-Victorian morality play, as cynical opportunism in which he uses globalized networks to move from one desperate labour force to another.

“In the UK warehouse, if somebody came to me and said I want a 25% pay rise, they’d be on the next bus back to Kirkby, it just wouldn’t happen.

“Because there’s another 100 people waiting to take their place. It’s not like that here.”

No doubt his profit margin and production costs mean that he cannot pay more than the minimum wage. Although I assume he is in receipt of local enterprise and authority funding – not to mention the good publicity he hopes to receive from his latest television appearance – I am prepared to tolerate this.

It was the implication throughout that Kirkbyites who might want £1.50 more an hour were lacking in any sense of work ethic which stuck in my craw. This attitude still was evident at the close of this episode, as one of the trial employees abandoned Caldeira as readily as he had abandoned Kirkby in 2004 and now Hangzhou.

The reason? He had found work at a packaging factory which offered £7.50 per hour.