This is a guest post by Hasan Afzal of StandforPeace.

It looks like Labour will come top in the local elections of 2012 but I’d like to focus on the recent stink cooked up by Baroness Warsi when she appeared to compare UKIP’s rise in council candidates to the nation-wide bust in the BNP’s popularity.

Fancy that, comparing UKIP to the BNP. Have a look at UKIP’s (former) man in Dudley.

Former UKIP councillor Malcolm Davis made a short political career for himself when he opposed the extension of the local Mosque, Dudley Central Mosque. It’s my local mosque and it does not have a history of extremism. Now, there are many reasons why one may be opposed to this. Issues concerning zoning and parking, for example, can mean that planning permission can be halted on purely pragmatic grounds.

Sensing an election was near, Malcolm Davis made the Mosque his number one election priority turning the issue into one of bigotry and hate. He even got the whole-hearted endorsement of the English Defence League. The EDL came to Dudley twice, their violent presence meant that the local town market had to be closed down losing the town and market traders essential revenue.

They came twice, officially, and at least a half a dozen times unofficially – and every time they came they had a friend to look up. This is what the EDL had to say when Malcolm met them (the link has been scrubbed from the EDL site but a cross-post is still available on the anti-Muslim hate blog, Atlas Shrugs):

And this is what Malcolm Davis made of the EDL:

It also doesn’t help when, as a politician, I denied myself the great opportunity to be well advertised and promoted as part of the demonstration on behalf of UKIP, whilst people like the Bishop of Dudley used it specifically as an excuse to promote his own selfish interests and use it as his own personal pulpit.

You read that correctly. Not only did he welcome the EDL mob, he wanted it made clear that it ‘part of the demonstration on behalf of UKIP’. The EDL even put this graphic up:

The EDL came a number of other times, in one occasion they broke into the site where the Mosque was to be built and made their way to the roof to play the Islamic call to prayer in the early morning, days before the general election of 2010. Later on, an EDL sympathiser put a pig’s head on the doorsteps of the Mosque. It was a very nasty, and scary, time to be in Dudley.

Fast forward to yesterday’s local election and what a turn of events. Malcolm Davis was booted out by the people of St.James ward in Dudley (which is by-the-by middle-class) in favour for a young twenty-something Muslim candidate who fought a decent campaign making local issues a priority whilst Davis did his best to whip up hysteria.

The local Conservative Party didn’t do any better either, just a day to go they tried the anti-Muslim card by publishing a flyer scaremongering voters into voting for them. They were awarded with a huge electoral loss and overall loss of the council. Here’s the flyer they used: 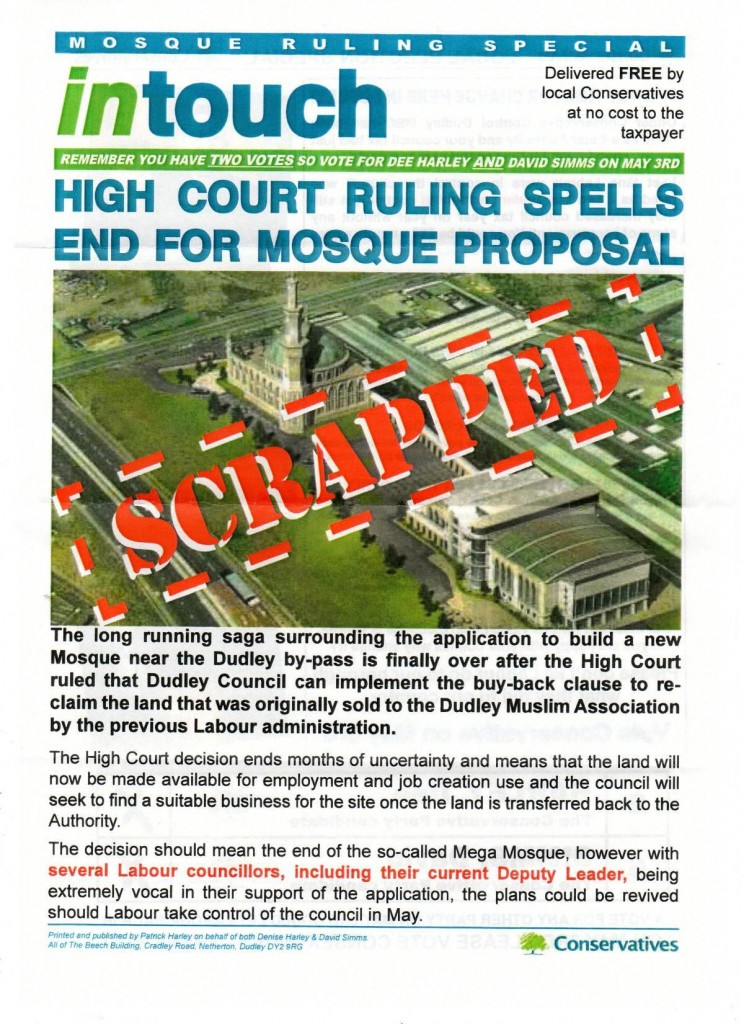 The case of Malcolm Davis has two ramifications for progressives. Firstly, rabble-rousing and bigotry are a turn-off for Middle Britain, and secondly, when exposed for what they are, the electoral shelf-life of bigots (be they anti-Muslim or Islamist) rapidly deteriorates in the face of public opinion.

So comparing the UKIP to the BNP, hmm? And what?