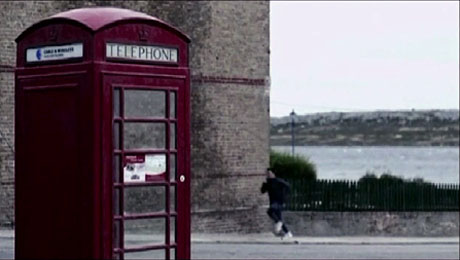 According to The Guardian, Argentina has filmed a promo for its Olympic team, surreptitiously, on the Falkland Islands:

Argentina has released a provocative advertisement that was filmed secretly on the Falklands and depicts the islands as “Argentine soil” in an apparent barb aimed at Britain ahead of the London 2012 Olympics.

“To compete on English soil, we train on Argentine soil,” is the slogan closing the advert aired on Wednesday night showing Fernando Zylberberg of the Argentine men’s hockey team on a training run past several landmarks on the Falklands.

The advert contradicts the government’s recent denial that Argentina would seek political gain from the London games, which take place from 27 July to 12 August. Argentina claims sovereignty over the islands in the south Atlantic and calls them Las Malvinas.

Well, Britain should have the last laugh and not issue (or revoke, as the case might be) Fernando Zylberberg’s visa to enter the UK. He’s had his chance to run on “English soil”.