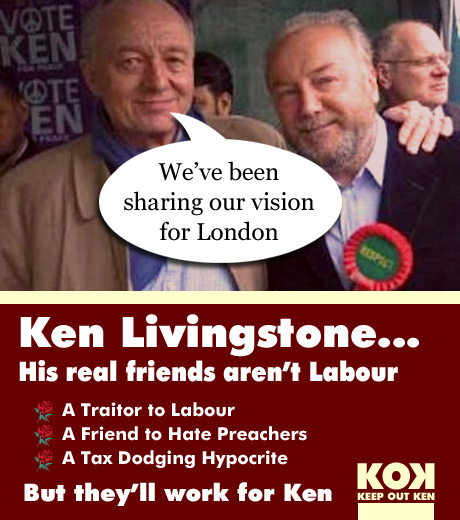 In an interview with the Evening standard, George Galloway offered his strategy to win – reclaim his ‘red roots’ and go for the three-quarters of a million Muslim voters who will decide the London election – to his friend Ken Livingstone.

This is Galloway’s advice:

“I have a good, close relationship with Ken and I strongly hope that he wins, but if I was a betting man I would probably put my money on Boris. Ken has to turn out his core vote to win — the disadvantaged, marginal and minority communities — and I don’t think he has fired them up yet.”

“We need to see a return of the colourful old Red Ken and less of the play-it-safe New Labour Ken. His campaign has lacked the élan, razzmatazz and hullabaloo we created on the streets of Bradford that inspired people to work for us and get out the vote.

“Second, he has been too defensive on his taxes. He should’ve said that all freelance broadcasters have the same arrangements, gone on the offensive and been upfront. Finally, he needs to connect to his core, including the 750,000 Muslim voters in London. If they don’t vote, he’s done for, but if they do, in numbers, he could win handsomely.”

George Galloway successfully used this strategy to subvert Labour in – where was it again, Blackburn? – and it is precisely the strategy that Galloway and Livingstone collaborated on to help Lutfur Rahman beat the Labour candidate in Tower Hamlets, making ‘independent’ Lutfur Rahman the mayor. Now it is time for Rahman and Galloway to help Ken Livingstone.

They say nothing succeeds like success. George Galloway’s shameless displays of communalism propelled him back into the House of Commons. Now he’s egging on Livingstone to push the strategy to new levels of brashness. Livingstone is an old hand at this sort of politics and – particularly if the Galloway-Livingstone-Rahman triangulation takes local politics to where they anticipate it will – he may very well succeed.

If he does, not only will the soul of the Labour Party be lost, but so will any hope for decency and cohesion in British politics.