It’s not really the equivalent of reading “Lolita” in Tehran, but still…

The memoir draws on Ball’s time in the 1960s as farm manager of poet Allen Ginsberg’s East Hill Farm in rural upstate New York, which Ginsberg called “haven for comrades in distress.” Ball was a self-declared member of the group, which included poets Gregory Corso, Peter Orlovsky, and Herbert Huncke and filmmaker Barbara Rubin. In spite of the challenges of managing a dilapidated Snow Belt farm house full of needy poets, Ball found time to discuss with Ginsberg poetry, the writing of Jack Kerouac, sex, and America’s war in Vietnam.

Ball has written two earlier memoirs and a volume of prose poems, Dark Music. He edited three books with Ginsberg and has written over 20 articles as well as many works of short fiction and poetry. His photographs, “Ginsberg & Beat Fellows,” have been exhibited in two dozen venues and published in as many books and periodicals; his films have shown at the Museum of Modern Art, the Guggenheim Museum, the San Francisco Art Institute, and other institutions.

Col. Ball (apparently at VMI, professors have a military rank) invited Ginsberg to read his works to cadets at the school a number of times. He took this photo of cadets studying Ginsberg’s most famous work in 1991: 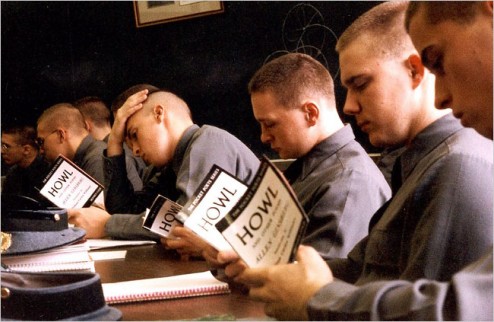 If you don’t find that at least a bit amusing, go look at “Howl.”

I’m not a fan of “Howl” myself (reading it, I keep wanting to tell Ginsberg to chill out), but I have appreciated some of the faux beatnik poetry that followed in its wake– like this scene from the 1958 B-movie “High School Confidential” (featuring Jerry Lee Lewis):

Still, I like the idea of cadets who have studied “Howl” and listened to Ginsberg (and perhaps appeared in a production of “Waiting for Lefty“) going on to serve their country honorably in the armed forces.

I won’t be going to Colonel Ball’s reading. Instead I’m planning to attend another event at VMI scheduled, strangely enough, at the same time: a panel discussion on the Spanish Civil War.