It is astonishing how using the first word as a racial slur, can land you in jail, whereas using the second word – a homophobic insult at least as hurtful and hateful as the first is tolerated and excused, and (ironically) particularly so when used by people who suffer the abusive application of that first word.

Take this for example. Here is the “Letter of the Month” from the music magazine, Q. 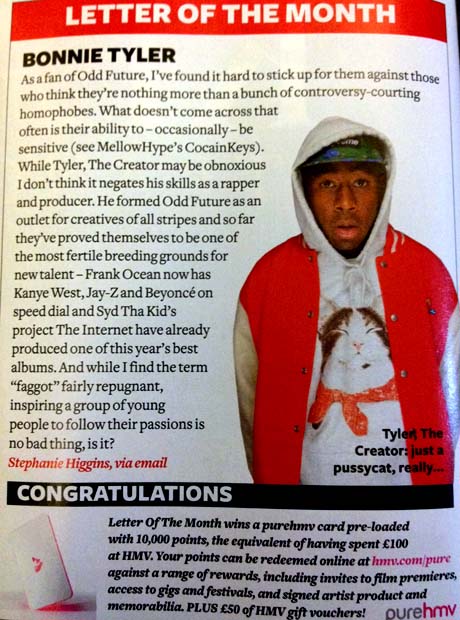 The writer of this letter was rewarded with an HMV gift certificate. The gist of is that, while this writer says she disapproves of homophobia, she is willing to overlook and excuse it when it comes from her favourite hip-hop artist. She sees it as nothing more than “controversy courting” from an artist who is otherwise “sensitive”, and “inspirational” and therefore one presumes the use of homophobic hate-speech is worth overlooking.

Would Q Magazine have printed a letter from a fan of skinhead band Skrewdriver which said a similar thing, for example:

As a fan of Skrewdriver, I find it hard to stick up for them against those who think they’re nothing more than a bunch of controversy-courting racists… And while I find the term “nigger” fairly repugnant, inspiring a group of young people to follow their passions is no bad thing, is it?”

This double-standard is echoed in law. In the UK, since there is no law specifically against homophobic hate speech, a black person could call a gay person a “faggot” and there would be no penalty, but the gay person could face a jail sentence for angrily replying in kind.

I think that criminal convictions for speech – unless there is a clear incitement to violence – are heavy handed. Jailing people for being rude and obnoxious is a step too far, particularly when the perpetrator has no public or political profile and can’t rationally be considered a threat. There should, however, be social consequences. If a person’s hateful potty-mouth led them to lose friends, a promotion, a job, customers, a place on a team, or any other likely and imaginable social consequences, it would be their own fault. These social mechanisms have always been the primary motivators of civility.

However, while racist speech is met with anger – and sometimes innapropriate criminal sanction, homophobic speech is met with something between resigned tolerance and approbation. So while I’m not arguing for homophobic trolls to be sent down (though in fairness perhaps they should be), I do think that it is unacceptable for a national magazine to print and reward apologetics for foul-mouthed homophobes.

If ‘nigger’ is unacceptable speech, why isn’t ‘faggot’?