How about this for a powerful image? President Barack Obama sat on the bus where Rosa Parks refused to give up her seat nearly 60 years ago in a landmark episode of the US civil rights movement. 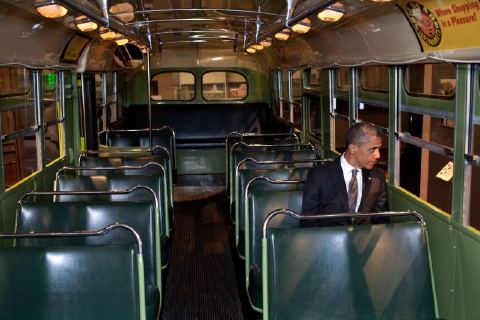 Obama stopped to see the bus during a visit to the Henry Ford Museum in Dearborn Michigan yesterday. He was on his way to a campaign fundraiser, but it is stirring none the less.

“I just sat in there for a moment and pondered the courage and tenacity that is part of our very recent history, but is also part of that long line of folks who sometimes are nameless, oftentimes didn’t make the history books, but who constantly insisted on their dignity, their share of the American dream,” he told reporters during a later event.

The White House released the above photo on Thursday morning.

All players wore his number 42 on their shirts as they played on Monday.

Yankees star closer Mariano Rivera is now the only active player still wearing No. 42. The number was retired by MLB 15 years ago on the 50th anniversary of Robinson’s debut.