He was dubbed a “vile miltant extremist” and an “anti-Semitic preacher of hate” by the Daily Mail, a “hate preacher” by the Sun and an “‘anti-Semitic’ speaker” by the Jewish Chronicle […] So what next? I’m told Salah is preparing to sue members of Her Majesty’s press over their alleged smear tactics.

The justification, according to Hasan, was that Raed Salah has:

received a letter from the Upper Immigration Tribunal stating that the decision to detain him appeared to have been “entirely unnecessary” and that his appeal against it had succeeded “on all grounds”.

However,the judge did not clear Raed Salah of antisemitism. Rather, Judge Ockelton deemed that Raed Salah would not be a threat to Britain’s communities, despite his antisemitic pronouncements.

Among other things, Raed Salah is on record as proclaiming:

“We have never allowed ourselves to knead [the dough for] the bread that breaks the fast in the holy month of Ramadan with children’s blood,” he said. “Whoever wants a more thorough explanation, let him ask what used to happen to some children in Europe, whose blood was mixed in with the dough of the holy bread.”

The truth of the matter is that the conjunction of the concepts of ‘children’s blood’ and ‘holy bread’ is bound to be seen as a reference to the blood libel unless it is immediately and comprehensively explained to be something else altogether.

Therefore Raed Salah can still be described as an antisemite without it even contradicting Judge Ockelton’s ruling. So on what grounds could Raed Salah sue the press?

Mehdi Hasan’s latest article was an appeal to authority alone. Yet the same judge, also deemed Salah responsible for promoting the blood libel, which is a lie that has motivated the murder Jews over centuries.

First, it was necessary to establish what Mehdi Hasan thought of the blood lie. After ignoring my tweets, Mehdi Hasan condemned the blood libel, in a series of tweets to Stephen Pollard:

Mehdi Hasan: ) Of course I condemn disgusting “blood libel” in any shape/form, from any person, & ludicrous/offensive of you to ask. Supporter of Salah”? Nice try. I’m opposed to his detention; doesn’t mean I back his religious/political views. […] I condemn blood libels from Salah or anyone else.

This afternoon, I phoned the New Statesman and asked to speak to Mehdi Hasan, for this reason.

I was put through directly to Hasan. I told Mehdi Hasan that as a New Statesman reader, I would like him to update his blog post in order to condemn Raed Salah for the blood libel, given that his blog post currently implies that it is libellous to call Raed Salah an antisemite.

His response to me, regarding the blood libel, was that:

“Raed Salah denies it, I deny it”

I argued that the judge had ruled that Raed Salah was responsible for the blood libel, so surely Hasan would accept this part of the judgement.

Hasan became defensive, telling me it was funny how people such as myself “know Point 57” well, out of a very long document.

As many readers will be quick to point out, you do not need to be an expert on Raed Salah, in order to accept that Salah has pronounced a blood libel against Jews, and that Ilan Pappé’s testimony on the blood libel was rejected by Judge Ockelton. Here is Point 58 of the ruling in full:

Besides, even the explanation does not quite work.  Professor Pappe accepts that “superficially” the reference could appear  to be to the blood libel but that the “sentence without the adjective Jewish is  not a repetition of the blood libel.”  He maintains that the next sentence of the sermon is a reference to a chapter in the history of the Inquisition. But neither the appellant nor Professor Pappe identified a source for this “chapter” of the Inquisition where Christians used blood of Muslim (or any other) children for Christian holy bread. There is no evidence that this is a commonly known matter in any of the communities in Israel, so that those hearing the sermon would recognise the reference.  The explanation now put forward would not, so far as the evidence goes, moderate the meaning of the words in the sermon as actually delivered.

If Mehdi Hasan is not an expert, then one has to wonder if he knows what he is doing. Hasan claims to condemn the blood libel itself as “disgusting”, whilst defending the man who spoke it.

Hasan put the words “anti-Semitic“, “vile” and “extremist” in scare quotes, when describing Raed Salah, as if Salah were none of those things.

Instead he thinks Salah’s blood libel is a “grey area“:

“I dont refuse to accept it. I said I withhold judgement as such quotes are grey areas.” 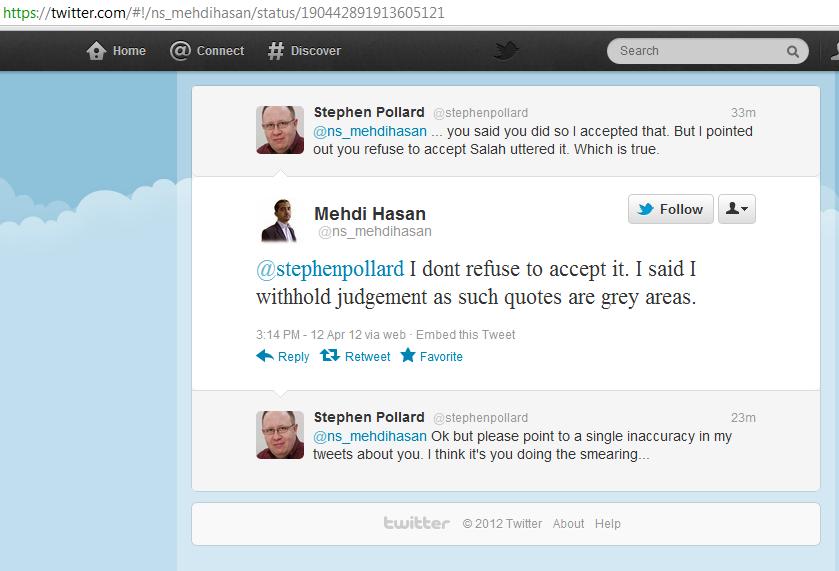 And so Mehdi Hasan refused my request for him to amend his article in the New Statesman.

Since writing this piece, Mehdi Hasan has tweeted:

Just had a phone call from someone called Yossi who accused me of supporting the “blood libel”. Thanks @stephenpollard #sighs#smearweek