It appeared to be one of the more callous suggestions for boosting economic output: that scrapping bank holidays

Thus, with between just eight and 10 public holidays in the UK (depending on area), it seemed designed to squeeze yet more pleasure out of a stressed and poorly rewarded workforce.

Yet, the authors of the source document, the Centre for Business and Economic Research has said that their conclusion was to distribute bank holidays across the year instead of being concentrated on months such as April and May.

This still comes across as callous, to my eye, as it presumes such holidays simply are seen as discrete units. Not, for instance, stretching two days off into a long weekend, or making use of spring and early summer activities; unlike a day off in November which may well be spent indoors. 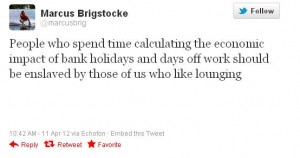