Readers of Harry’s Place will be familiar with the strange phenomenon of the hospitality extended by The Quakers – a small religious sect which eschews violence in all its forms – to a variety of hate preachers and theocratic Islamist political movements, all of which explicitly sanction the most horrific violence, backed by religious injunction, against women, gays, Jews and religious dissenters.

We have previously discussed the strange politics which renders The Quakers oblivious to the calls to combat, not promote, the politics of hatred. They won’t be moved. So I don’t propose to rehearse those arguments here. The Quakers are beyond reason.

For a while, it looked as if hate preachers might possibly have been asked to take their custom elsewhere. No such luck. June sees the return of some of the worst inciters of religious violence in the United Kingdom to Friends House. 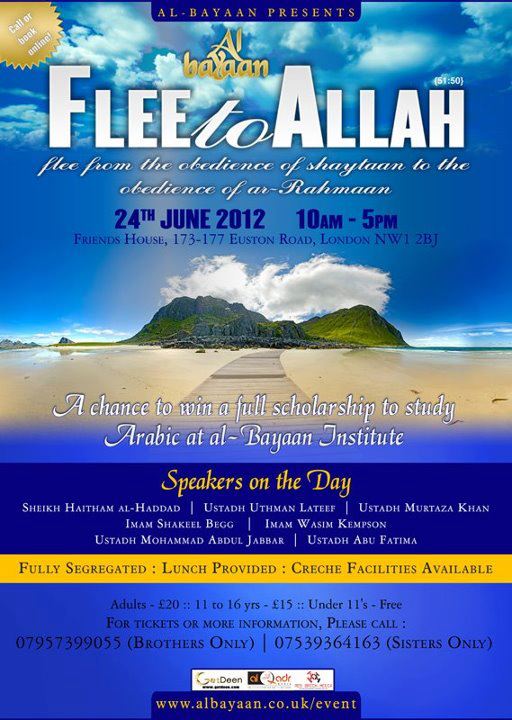 Haitham al Haddad is a man who has a history of making racist and extremist statements, presented not simply as his personal political views, but as the unquestionable word of God. He taught the Undiebomber, Abdulmuttalab, and spoke on the same platform – by video message – as Anwar al Awlaki, the Al Qaeda hate preacher who recruited the Undiebomber to terrorism. This was to students at City ISOC.

The Islamic Sharia Council on which he sits as a judge produces such remarkable rulings as the following:

Narrated by Abu Hurayrah that the prophet said, “if a man calls his wife to his bed and she does not come, and he goes to sleep angry with her, the angels will curse her until the morning.” Agreed upon. This narration should be enough to make any woman pay heed to the severe warning by the prophet that the angels curses are upon those who do not respond to husbands sexual needs because the purpose of a woman is to fulfil that and for that they are made in order to produce offspring. We also know that Allah does not rejects supplication made by angels as they are His closest creation who are always praising and glorifying Him.

Astonishingly, this is the answer in the context of asking what should be done about a woman who has been sexually abused as children and who consequently sometimes refuses sex with her husband. There are more. See here. And here.

Uthman Lateef is an outspoken and vicious homophobe and supporter of jihadist politics. Famously, he appeared at an event at the East London Mosque/London Muslim Centre featuring Anwar Al-Awlaki into 2009, when it was very clear that Awlaki was a leading Al Qaeda operative.

He regularly appears at the notorious Belmarsh Iftar event, at which supporters of those held on terrorism charges gather to show solidarity. At the Belmarsh Iftar solidarity event in 2010, Uthman Lateef said this:

Murtaza Khan is another inciter of violence against gays:

Now what is the punishment [for homosexuality]? According to the Bible, excuse me, this is a Christian country. Read the history of this country. Christian country. According to the Bible, the Bible says the person should be thrown down from a mountain and then stoned on top of that. That’s what Isa [Jesus] told you people. But they teach “no, you’re homophobic”. And those Christians who stand up against this abominable action, which goes against humanity, then they’re fundamentalists like us as well then.
…
I’m not homophobic. I believe in a natural way of life. I’m repeating you what your Bible tells you. In the hadith you find: “You find the people doing the action of Lot, kill the one who does the action and the one the action is being done to.”

This is what Murtaza Khan has to say about non-Muslims:

“Those whom the wrath of God is upon is the Jew, is the Christian.”

“We should have a sense of shame. For how long have we seen that our mothers, our sisters and our daughters have to go and uncover themselves in front of these filthy non-Muslim doctors?”

He was another speaker, alongside Al Qaeda’s Anwar Al Awlaki, at the 2009 City ISOC event.

You can read all about Shakeel Begg here. In summary, he has encouraged students to fight “jihad” in Israel, has celebrated the imprisoned Al Qaeda terrorist Aafia Siddiqui as a ‘hero of Islam’, and tells Muslims to see the police as the devil, at war with Islam. So, of course, he has participated an a demonstration with Amnesty International.

Difficult really to know what to say about this.