The European Court of Human Rights has ruled that a number of jihadists, awaiting extradition to the United States, can be so deported.

This is what Abu Hamza is wanted for:

The indictment charges Hamza with hostage taking and conspiracy to take hostages, in connection with an attack in Yemen in December 1998 that resulted in the death of four hostages. The indictment also charges Hamza with providing material support to terrorists, and specifically to al Qaeda, for allegedly attempting to set up a terrorist training camp in Bly, Oregon, from October 1999 to early 2000. The indictment also includes charges of providing material support to terrorists, specifically to al Qaeda and the Taliban, for facilitating violent jihad in Afghanistan.

This is what Babar Ahmad is wanted for:

This is is how Babar Ahmad’s website, azzam.com, responded to the 9/11 attacks. The screenshot below comes from 16 September 2001 (click to enlarge): 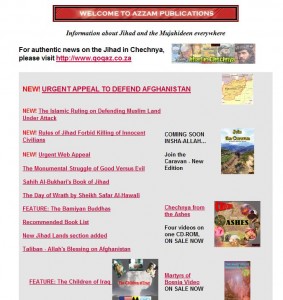