This is a post from June 2011. In the probably futile hope that it will help to educate the Ockletons of this world, it has been re-posted. 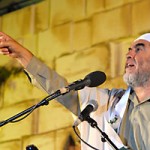 Raed Salah is the leader of the northern branch of the Islamic Movement in Israel. It is aligned with Hamas.

This makes Salah a perfect partner for the thugs and racists of IHH.

IHH is the Turkish Islamist charity that provides political support and millions of dollars worth of material assistance every year to Hamas. 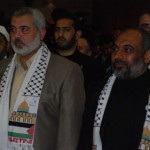 Bulent Yildirim, president of IHH, with Hamas leader Ismail Haniyeh in Gaza. Yildirim was in Gaza to oversee a convoy’s delivery of political and material support to Hamas.

In this hard core Islamist crowd, even Osama Bin Laden gets some credit. Raed Salah’s movement was not best pleased with his killing, calling him a “sheikh” and “martyr”, done in by American “mercenaries” of “Satan”.

IHH too was displeased, it appears. In May one of its trustees, Osman Atalay, joined a group of Turkish Islamists to denounce the operation:

Atalay strongly attacked the United States in his speech, accusing it of killing thousands of Iraqi and Pakistani civilians. He claimed that millions of people were killed in Iraq, that the United States used chemical weapons in Fallujah and broke international law. He said the killing of bin Laden had been clearly illegal and that “American terrorism” had to be condemned.

Raed Salah and IHH mix ideological affinity with work together on the ground.

For example, Salah was one of the speakers and a member of the “consultative board” of a symposium on Jerusalem’s Al-Aqsa Mosque held in Istanbul in April 2009. IHH was a lead organiser. Visitors to the symposium’s website are greeted by an animation of a Jew burrowing under Al-Aqsa to destroy it. The conference logo drove home the point: 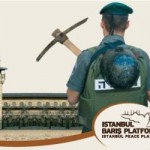 This is one of Salah’s favourite scurrilous themes. For a sample, see him on Yusuf Al-Qaradawi’s Islam Online:

“They want to do it in a way that would appear as is happening as a result of natural causes, such an earthquake.”

Salah says that Israel has a “diabolical plan” and is acting on it while Muslims are still just watching and contenting themselves with verbal protestations.

A much bigger event was to come – the IHH flotilla to Gaza in May last year.

Here is a picture of Salah (third from right) in Istanbul at the launch ceremony of the flotilla, where he was a guest of honour. IHH president Yildirim is to his right. On the left of the picture is Zaher Birawi and third from left is Mohammed Sawalha. Birawi and Sawalha are among the most prominent servants of Hamas in the UK. Birawi is also one of the people who wants to bring Salah to Britain. 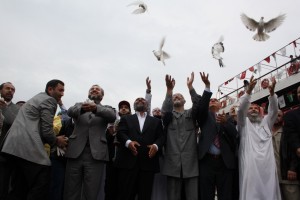 Have a look at the Istanbul ceremony in the video below. Chants of “intifada!” and “Khaybar!” ring out over the sound system. “Khaybar! Khaybar! Oh Jews! The army of Mohammed will return!”

Khaybar is a reference to the battle in that town in Arabia, when Mohammed and his army crushed the Jews, killing their leaders and degrading the survivors. Today “Khaybar” is a rallying cry for the worst of Islamist extremists.

There was more “Khaybar!” chanting on board once the Mavi Marmara was underway.

Salah was in the thick of all the incitement. You can see him in the front row of this clip, grinning as Yildirim fires up the hard core activists.

Now they say that they will launch a fleet [against us], that they will send commandos here [to this ship]. And we say, if you send in the commandos, we will throw you down from here and you will be humiliated in front of the whole world.

Salah made his own contribution:

For example, Kuwaiti MP Dr. Walid al-Tabtabaei said after his return to Kuwait that Raed Salah had been the “star” of the convoy and had made enthusiastic statements during the trip (Al-Ra’i, Kuwait, June 3, 2010, according to Barkan’s article). Dr. Muhammad al-Baltagi, deputy secretary-general of the Muslim Brotherhood faction in the Egyptian parliament, reported that on the eve of the Israeli forces’ raid of the ships, several clerics delivered sermons that incited the passengers. He said that Salah related a hadith in which the Prophet Muhammad explained the virtue of jihad and of the ribat (a border region of the Islamic world where Muslims set out to fight infidels) (ikhwanonline.com, June 8, 2010, according to Barkan’s article).

The incitment worked. See how enthusiastic this convoy participant is about death at the hands of Israeli “cockroaches”. He is followed by a clip of Hüseyin Oruç, deputy president at IHH, praising convoy members for their readiness to become “martyrs”.

Salah was back in Istanbul just last month for an IHH press conference. Once again he had Hamas operative Mohammed Sawalha for company. Kevin Ovenden, a trustee of Viva Palestina, George Galloway’s Hamas support operation, was also there. Ovenden has been decorated for his services to Hamas by Ismail Haniyeh. 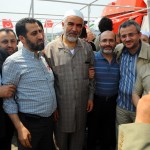 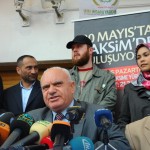 After the press conference IHH staged an Israel hatred rally in Istanbul.

Its participants included an Iranian delegation waving Hezbollah banners. They had come to Turkey to meet with IHH officials. The regime in Tehran is keen on the flotillas, as you can see in this picture of Ahmadinejad meeting with activists in Tehran in February. 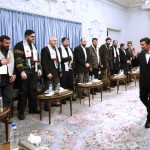 Salah was one of the speakers at the Istanbul rally. He made threats again:

Raed Salah’s close links with IHH and UK operatives for Hamas are another reason why people should see him as nothing but an extremist. They should also prompt the government to exclude him from the UK.

Here is a line from David Cameron’s speech in Munich earlier this year:

Whether they are violent in their means or not, we must make it impossible for the extremists to succeed. Now, for governments, there are some obvious ways we can do this. We must ban preachers of hate from coming to our countries.

Let’s see his government act on that promise in the case of Raed Salah. 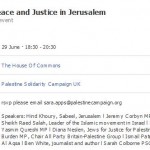 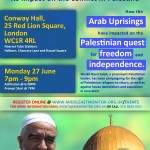 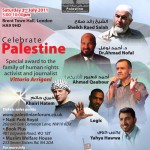 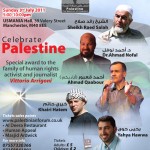